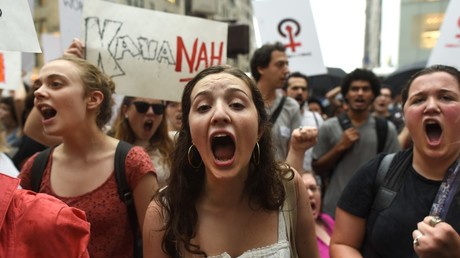 RT looks at those who have been caught in the cross-fire of the campaign against the Supreme Court nominee Brett Kavanaugh, and forced to pay a price.

Joe Kaplan, a Facebook executive who has been friends with Kavanaugh for decades, had the gall to attend his Senate hearing last week. Kaplan was forced to say sorry for the “deeply painful moment,” while the social media network released a message saying its leadership had “made mistakes.”

Meanwhile, Bob Long, an Oklahoma pastor, was condemned merely for urging people “regardless of where they stand politically” to “step back” from the spectacle of “senators hollering at each other” during the same hearing, in a call for better manners and more substance in American politics.

After many threatened to boycott his church, and an online campaign against him started on Twitter, the preacher said sorry for “invoking pain” and begged for forgiveness.

“This is hysteria mixed with misinformation. And if you dare to question anything – such as the Christine Blasey Ford allegations – you are labeled anti-female, pro-rape and you are shut down,” media analyst Lionel told RT.