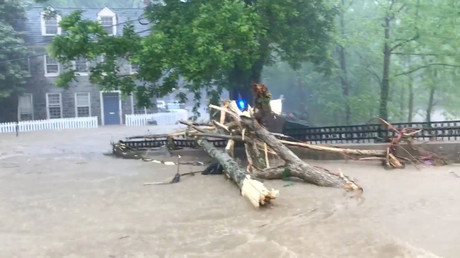 As flash flooding rips through Maryland, knocking down cars and soaking the ground floors of buildings, locals trapped by the deluge have been posting videos and photos of the calamity.

Videos showing muddy water running through the Ellicott City, which has been the hardest hit by the raging waters, have inundated Twitter.

A video filmed outside the city shows cars abandoned on the streets being devoured by water.

While there have been no reports of casualties so far, the flood apparently caught some visitors by surprise.

“Thank God for good people who took us in off the streets! Anxiously waiting for the rain to stop and floods to slow,” Kat Foster, who escaped the rising waters, wrote on Twitter, posting a video of the deluge.

As the water swept through the city, numerous videos posted online showed the flood rising to engulf the ground floors of buildings and streaming into open windows.

Photos of trashed shop windows and cars scattered on the streets show the grim aftermath of the disaster.

The fast-moving water trapped dozens of cars on the street, with lone standing vehicles being swept away.

A state of emergency was declared in Maryland on Sunday, with authorities saying that the flood was of the same scale that rocked Ellicott City in 2016, leaving two people dead and many businesses and homes devastated.