Janine Jackson interviewed Tim Karr about the fight for net neutrality for the May 11, 2018, episode of CounterSpin. This is a lightly edited transcript.

Janine Jackson: All social justice fights intersect in some way. But net neutrality is the definition of a keystone issue: The policy protects the space in which to discuss and debate and organize all the other fights, the means to talk around the legacy media gatekeepers—the ones who tell you that killing people in other countries to force them to change their elected leadership is reasonable, but providing healthcare for everyone is outrageous.

In a sort of slow-motion trainwreck, the Trump FCC—led by former Verizon lawyer Ajit Pai—moved to dismantle net neutrality protections only recently won. Millions of people voiced their strong opposition, but were overruled—while Pai and his agency produced a truly bizarre video of him doing a smug victory dance to show off to a bunch of industry lobbyists.

But reports of the death of net neutrality, which listeners will have heard last month, might be exaggerated. In fact, the fight—too important to give up in any event—is still underway. Here to bring us up to speed is Tim Karr. He’s senior director of strategy and communications at Free Press. He joins us now by phone from Hoboken. Welcome back to CounterSpin, Tim Karr. 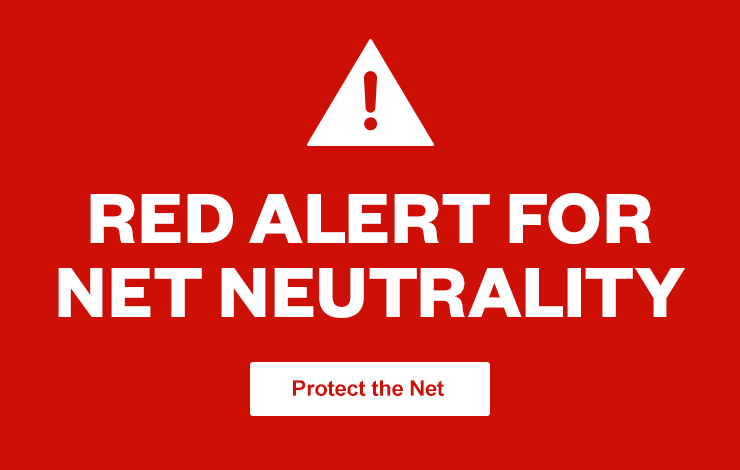 JJ: These events, we want to be clear, are evolving as we speak. We’re recording this show on May 10; lots of listeners will have seen “Red Alert” banners across the web yesterday, designed to draw attention to the fight. And then just now as I was eating lunch, I read that the FCC has now declared the official death of net neutrality will now be June 11. What is the current state of play here?

TK: Well, it’s easy for people to get confused about the various ins and outs of the net neutrality fight. It’s a battle that we’ve been fighting for 13 years now. We did win, as you mentioned, a huge victory in 2015, when we got the Federal Communications Commision to put strong net neutrality rules in place. And those were then rolled back under the Trump FCC, and their chairman Ajit Pai, in December of 2017, voted to repeal those net neutrality rules. And because of the administrative process in Washington, it actually takes some time for that vote to take effect.

It also triggered something else, and it’s something that we’ve been working on, and it’s why people have seen those Red Alerts around the web. There is a somewhat arcane congressional process, under the Congressional Review Act, that allows Congress to reject a rule change. And we have been pressuring members of both chambers, the Senate and the House, to sign on to what’s called a “resolution of disapproval,” that would reject Ajit Pai’s ruling and restore the net neutrality protections that we won in 2015. It’s a bit of a race against the clock, because we have to get that resolution passed within 60 legislative days of the vote. So we have a couple of weeks left.

And the good news is that the Senate plans to vote on the resolution of disapproval sometime by the middle of next week, around May 16 or 17. And that would be one step along the way to restoring net neutrality protections.

The other thing that you mentioned is that the rule change actually goes in effect on June 11. So what we’re doing is really focusing on the congressional piece, getting the rule itself reversed. But my organization, Free Press, is also very active in the courts. We’re suing the FCC, saying that the decision that chairman Pai made didn’t follow a correct process; it was based on false information. So we also have the courts, the federal appeals court, where we’re bringing a suit against the FCC to restore the net neutrality protections as well.

JJ: And another thing just to add to that that seems to be going on is that as soon as the Trump FCC did this—and it was widely predicted, I mean, you saw it coming up the avenue as soon as Pai was made commissioner—some states said, “Well, we can try to preserve net neutrality rules at the state level.” Can that work? It sounds a little counterintuitive. 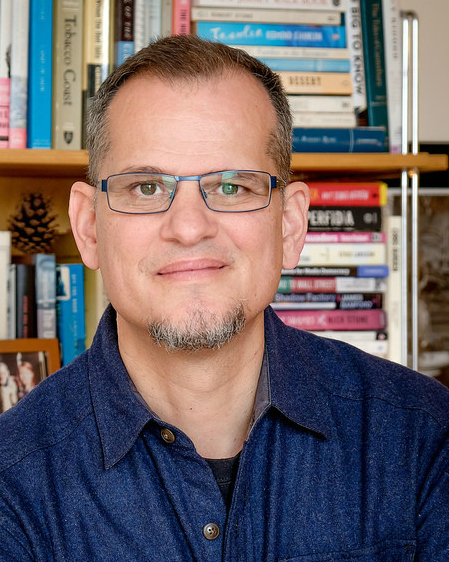 Tim Karr: “It’s about getting as many people as possible to understand what’s at stake and to throw their support behind protecting the open internet.”

In addition to that, more than a hundred mayors have also signed on to a pledge that said that their city will not do business with any ISP that violates net neutrality. So we’re talking about billions and billions of dollars of business contracts that are at stake here. So local leaders have stepped up as well.

They’re responding not only to the outrage of the decision that was made at the FCC last year, but also responding to their constituents. And poll after poll after poll shows that it doesn’t matter whether you’re a Democrat or a Republican or an independent or any other party: Overwhelming majorities of people in the United States support net neutrality rules. We’re really pushing back against this very concerted effort inside the Beltway, which has been funded by the phone and cable lobby, to take away these rules against what most Americans say they want, which is these protections for the open internet.

JJ: That’s what makes it so dystopian. The FCC, in name, is meant to be the representative of the public in the telecommunications industry. You have millions of people, you have states, you have communities, saying, “We want this!” And then you have the FCC saying, “Ehhh…you know, too bad.” You know? It seems really bizarre.

TK: Right. This is not the way our democracy is supposed to work, right? The people that we have in Washington, nominally, are supposed to represent the people who put them in office. Which is why we’re confident that not only is this an effective issue around which to organize the public and to get them involved in Congress, but we also have a sound legal argument to show that chairman Pai was really defying the law itself, the 1996 Communications Act, by making this rule change. 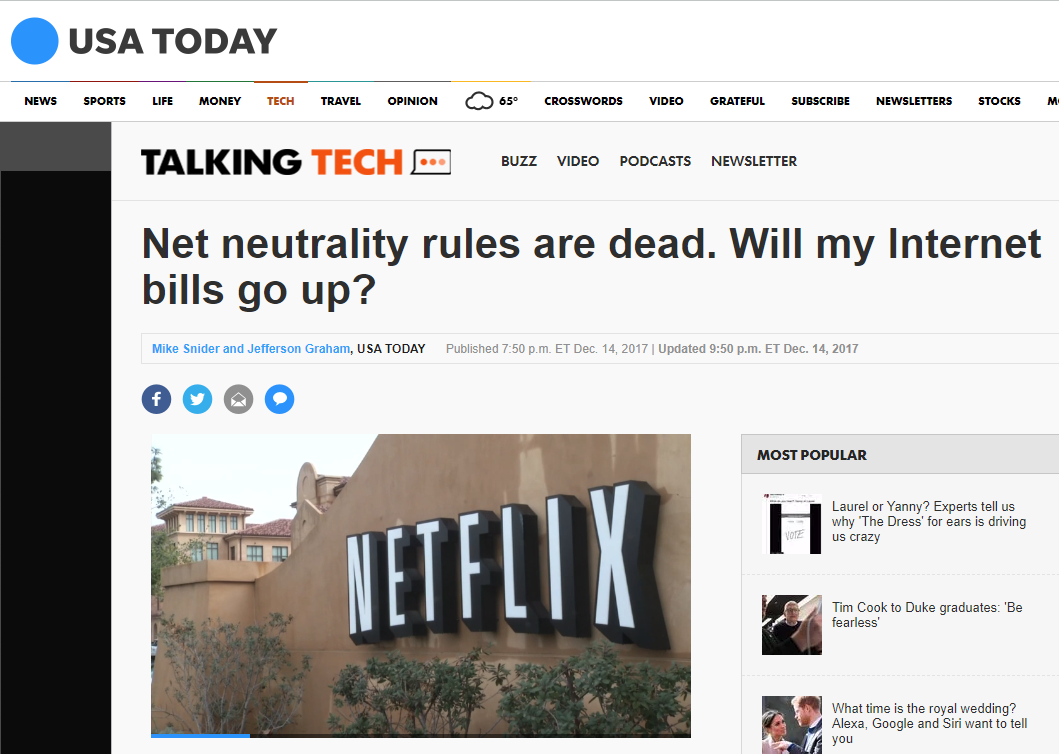 JJ: Well, I’m looking through media coverage, and as I’m reading USA Today, I come across this headline, it was a link to a kind of explainer that they had, and it said, “Net Neutrality Rules Are Dead. Will My Internet Bills Go Up?” And I think we can all appreciate consumer-focused reporting, and thinking about cost is, generally speaking, a progressive approach. But in this case, I couldn’t help but see it as a really significant misrepresentation of what’s at stake here, which is not just a matter of your bills going up.

TK: Yes, I mean, we’ve often called net neutrality the First Amendment of the internet, and by that we mean that it’s a rule that prevents your internet service provider from blocking or interfering or throttling with your internet connection. When you pay whatever it is you pay to AT&T, Comcast or Verizon to provide you with an internet connection, they complete that contract and then they get out of the way. Which is to say, you go online and you are in control of your own media experience. You get to choose which websites you go to, which online services you use, and your internet service provider simply connects you to those and provides you with the speed of service that you’ve purchased.

What they’re trying to do is get paid at both ends. They’re trying to make you pay for access, but also to go to the various websites and services out there and say: “Hey, do you want to reach our customers? You have to pay us extra.” And they can privilege certain websites, in the absence of net neutrality rules, they can privilege certain websites and services. So for example, Comcast—which has its own video-streaming service—could make that work over your connection, and they can hobble a service like Netflix.

But I think the point that you’re getting to, really, is about the importance of the internet, not only for those sorts of business relationships, and having customers control the experience, but also as a tool for organizing. Some of the most important protest movements of the last decade, whether you’re talking about Black Lives Matter, whether you’re talking about March for Our Lives, the Women’s March, all these important movements have been organized over an open internet, where the groups and individuals who organize these political movements can go online with the assurances that their access provider won’t in any way prohibit their ability to make those connections, to connect with people and to organize very large movements, out of their bedroom office or their garage or wherever it is that they’re doing this work.

JJ: Right. We know that with corporate media, if you can’t find an advertiser to sponsor your message, well, your message doesn’t get on. And that, of course, is the beauty and the power of a free internet, is that you can get points of view out there that a deep-pocketed corporation doesn’t want to sponsor, but that we as a society nevertheless want to hear and want to discuss.

I understand also, though, from work by Ernesto Falcon at Electronic Frontier Foundation, that ISP lobbyists are going around the states now, because as we’ve discussed, states are working on their own net neutrality stuff, ISP lobbyists are going around to states now, saying that net neutrality is going to put them out of business. That if they can’t do paid prioritization, well, they’re not going to have the money to pay for upgrades, and they’re going to have to charge more, which brings us back to that USA Today piece, “Will My Internet Bills Go Up?”

TK: Yeah, well, these are companies that make tens of billions of dollars annually in gross profits, so they’re not going to the poorhouse.

TK: All we’re asking, simply, is that they observe some simple rules of the road, and they preserve the democratic principle that makes the internet so important for internet users.

JJ: Finally, you want swells of public attention, particularly if there’s a time window for communicating with lawmakers, for example. But as much as we want to gin up attention in some strategic moments, we have to see this as a long-haul battle, don’t we?

TK: We do, and I think it’s really important that this battle, even though we’ve had some wins and we’ve had some losses, has really been successful in mobilizing public support. And there are now tens of millions of people who’ve taken action on this issue. And we’re looking at the possibility, later this year, that the composition of Congress could change, and that we would have a different set of leaders there who support net neutrality. There is hope, not only in the short term, with the upcoming elections, but over the long term, should a new administration come in to restore whatever net neutralities we may have lost.

And so for us, it really is a movement-building exercise. It’s about getting as many people as possible to understand what’s at stake and to throw their support behind protecting the open internet. And also to understand that they have agency, that they can take action, they can call their members of Congress, they can write the FCC, and there are organizations like ours that are standing behind them, and will make sure that their voices are heard.

JJ: We’ve been speaking with Tim Karr, senior director of strategy and communications at Free Press. They’re online at FreePress.net. Listeners also might want to check out BattleForTheNet.com. Tim Karr, thank you so much for joining us this week on CounterSpin.