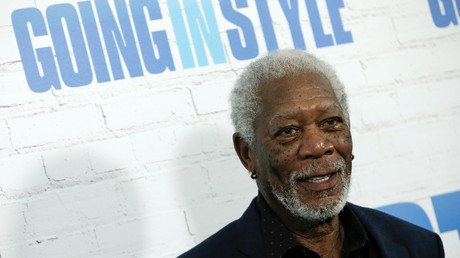 He voiced God in blockbusters, won an Oscar for best supporting actor, and became the public face of a campaign to demonize Russia. Now, Hollywood legend Morgan Freeman has been accused of inappropriate behavior towards women.

Four women who have worked on movie sets with Freeman over the past decade have accused the actor of “repeatedly behaving in ways that made women feel uncomfortable at work,” according to a CNN article published Thursday. Two more said that Freeman “subjected them to unwanted touching” while another three said he had “made public comments about women’s clothing or bodies.”

“I apologize to anyone who felt uncomfortable or disrespected — that was never my intent,” Freeman, 80, said in a statement after the CNN article was published.

One of the accusers is the CNN entertainment reporter Chloe Melas, who co-authored the article. She said Freeman had made inappropriate comments to her over a year ago, when she interviewed him at a press junket while she was six months pregnant.

Lol what a shocker….and wasn’t Morgan Freeman on the forefront of Russia “resistance” last year?

In September last year, Freeman made headlines when he narrated a propaganda video for the “Committee to Investigate Russia,” a nonprofit set up by director Rob Reiner. Among CIR’s notable members are neoconservative pundit David Frum and former Director of National Intelligence James Clapper, who believes Russians are “genetically driven” to manipulate.

That fact was not lost on some social media users, while others predicted the #Resistance would come to Freeman’s aid by claiming he was framed by Russia.

as a lefty I lost faith in Morgan Freeman when he did those dumber than hell ‘Russia is responsible for all of America’s problems’ videos produced by meathead, but still 8 women, this is incredibly sad to hear

The former celeb booster of the Committee to Investigate Russia has been accused of sexual misconduct by multiple women now https://t.co/vGrL2TXgvV

Sure enough, that happened.

Republicans are waging a war on people trying to save America from trump.

While the video Freeman narrated made a big splash in the US media at the time, the Russian government chose not to take it seriously. Russian Foreign Ministry Maria Zakharova did warn, however, that Russia is being scapegoated in internal US power struggles.

“Do you see Russia’s role here? Right – to legitimize illegal actions. Without this external factor it would be a new Watergate, but with this ‘foreign meddling’ the story was sent along the alley of national security,” she said. “The finale will be spectacular. Can’t wait to see it.”

Freeman is the latest celebrity to face accusations of inappropriate behavior, after accusations against movie mogul Harvey Weinstein last year opened the floodgates. Actresses who accused Weinstein of sexual abuse, harassment and even rape have shared their stories in public using the hashtag #MeToo.