Washington plans to slap Moscow with a new batch of sanctions as early as Monday, the US ambassador to the UN, Nikki Haley said. The new measures are said to be a response to Russia’s alleged “aggressive actions.”

Haley blamed Moscow for the tense relations between the US and Russia and accused it of continuously engaging in aggressive behavior. She added that Washington would respond with a number of aggressive steps of its own. 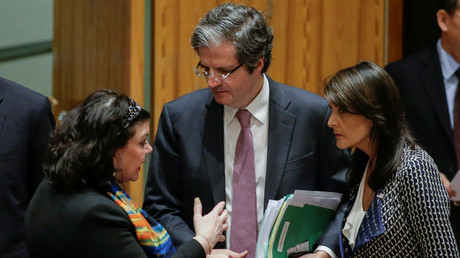 “The sanctions [are] continuing to happen, which you will see again on Monday,” Haley told Fox News Sunday. “This lets them [Russia] know that this [is] not good behavior.”

The new restrictive measures would be announced by the head of the US Treasury Department, Steven Mnuchin, on Monday, Haley told the CBS’s “Face the Nation.” She also added that the sanction “will have to do with chemical equipment used by [the Syrian President Bashar] Assad.”

Speaking to Fox News, Haley accused Russia of de-facto facilitating the alleged chemical attack in the city of Douma in the Damascus suburbs by supporting the Syrian government. “Assad knew that Russia had its back, Assad knew that Russia would cover for them at the United Nations, and Assad got reckless,” she said, adding that the US has to be “conscious of the fact that we can’t allow even the smallest use of chemical weapons.”

Despite numerous accusations that she threw at Moscow, Haley told Fox News that the US “hopes” it can “get a better relationship with Russia.”“It is in our best national interests to do that,” she added.

Washington and its allies launched a massive missile strike targeting the Syrian military and civilian facilities in retaliation for the alleged “chemical attack” that was reported by rebel-linked groups. They ignored evidence showing that the incident might not have happened, and chose to strike hours before the Organisation for the Prohibition of Chemical Weapons (OPCW) was to start an investigation.

Haley also accused the Syrian government of using chemical weapons in Douma during a UN Security Council (UNSC) meeting that was convened following the strikes launched by the US, UK, and France. She did not provide any specific evidence to substantiate her claims. Instead, she referred to the US actions as “justified, legitimate and proportionate.” 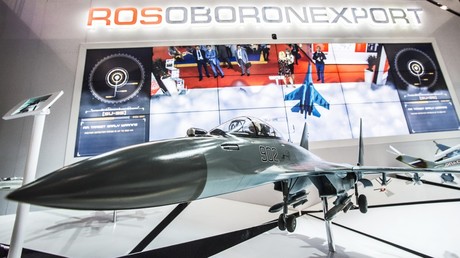 During a previous UNSC meeting, the US envoy to the UN also accused Russia of “stopping at nothing to defend the Syrian regime’s multiple uses of chemical weapons,” also without providing any evidence.

Washington has repeatedly imposed sanctions on Moscow under various pretexts. In early April, the US Treasury imposed its latest set of measures against Russia, which involved restrictions against some major Russian energy companies, such as En+ and EuroSibEnergo, as well as diversified industrial groups. State company Rosoboronexport, which controls most of Russia’s arms exports, was also subjected to sanctions.

In total, 24 Russians and 14 entities were targeted by the latest sanctions, including prominent Russian businessmen, such as Oleg Deripaska – the former president of United Company Rusal, the second largest aluminum company in the world, and Aleksey Miller – the CEO of Russian energy giant Gazprom.

In response, Russian MPs drafted a bill to suspend cooperation with the US in the nuclear, missile, and aircraft-building fields, as well as restrictions on imports of alcohol and tobacco from the US.

Russian state tech corporation Rostec, which controls Rosoboronexport, denounced the latest sanctions as “unfair competition.” All of Washington’s accusations against Moscow are “just an excuse for pushing Russia out of the global arms market,” a Rostec spokesperson told Russian media.