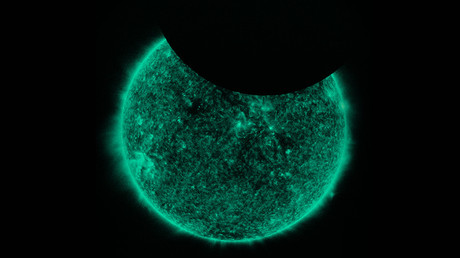 Not one to be outdone by its “hotter” counterpart, the Moon made an unexpected appearance in front of NASA’s lens, which was pointed at the Sun during a recent close-up of the star.

Nasa’s Solar Dynamics Observatory (SDO) was capturing ultraviolet images of the Sun on October 19 when the moon photobombed the shot for some 45 minutes while in transit, covering about 26 percent of the Sun at the peak of its journey.

The lunar shadow can been seen crossing the SDO’s viewpoint of the Sun between 3:41pm and 4:25pm EDT in a high-speed GIF released by NASA.

“The shadow’s edge is sharp and distinct, since the Moon has no atmosphere which would distort sunlight,” explained the agency.

The images were captured by SDO in a wavelength of extreme ultraviolet light that shows solar material heated to more than 10 million degrees Fahrenheit. This kind of light is invisible to human eyes, but colorized here in green by NASA.

The SDO launched in 2010 as part of Nasa’s ‘Living With a Star’ program for an initial five-year-mission, and has been observing the sun some 22,000 miles above Earth’s surface ever since.