The state of California has moved ahead in its ongoing legal battle with agribusiness giant Monsanto, announcing it is putting glyphosate, a key ingredient of the firm’s popular weed killer Roundup, on a list of cancer-causing chemicals.

The notice on the herbicide’s inclusion onto the list of chemicals “known to the state to cause cancer for purposes of Proposition 65 [Safe Drinking Water and Toxic Enforcement Act of 1986]” was published by California’s Office of Environmental Health Hazard Assessment (OEHHA) following a failure by Monsanto to block the listing in trial court.

The inclusion into the list, to be enforced starting from July 7, will mean Monsanto and other companies selling products in which the herbicide is one of the components, will have one year before they are obliged to put a warning label on the packages.

The company argues that the chemical, which has been on the market since 1974, does not provoke cancer and its labelling as a carcinogen would be a blow to its already tainted image.

Commenting on California’s regulator decision, Monsanto’s vice president of global strategy, Scott Partridge has vowed to “continue to aggressively challenge” what he called an “improper decision” by the OEHHA.

“This is not the final step in the process, and it has no bearing on the merits of the case,” Partridge commented to Reuters.

In adding glyphosate to the carcinogen list, California acts in line with the World Health Organization’s International Agency for Research on Cancer (IARC). The respective IARC report on the issue of glyphosate’s properties, in which it was dubbed “a probable carcinogen” came out in 2015, having sparked fierce debates on whether and to what extent restrict the use of Monsanto’s product. 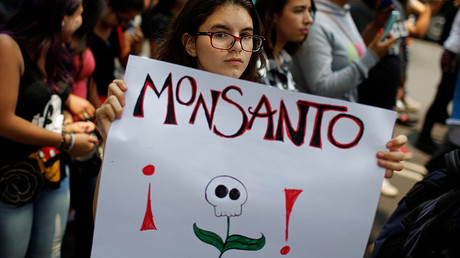 Although some European countries opposed the renewal of the license for the weed-killer at the time, it was extended for another 18 months last July.

Meanwhile, California health authorities are still looking into effects of glyphosate on human health, studying some 1,300 public comments submitted to OEHHA on the issue.

“We’re reviewing those comments,” OEHHA spokesman Sam Delson said, as cited by AP, adding that whether the chemical poses a substantial danger to a person’s health remains to be seen.

In recent years, Monsanto and some of its products have become a target of widespread criticism, with thousands of environmental activists around the globe marching against the corporation every year.

Earlier this month, more than 1 million people signed an online petition demanding the EU ban glyphosate. The EU is currently mulling whether to renew the license for the controversial herbicide produced by Monsanto and is set to formally decide on the matter in December.