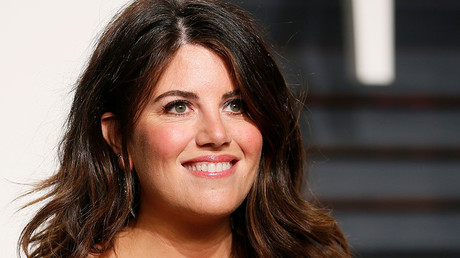 “Monica Lewinsky” weed is here, the former White House intern has announced to the world. The hybrid strain is dressed in blue, but there is no word, yet, on whether it brings users to their knees.

Lewinsky tweeted Thursday night, “guys!” and included emoji fingers and wide eyes pointing down to a picture of a vile of marijuana with a label bearing her name.

Vanity Fair technology writer Maya Kosoff also took interest in the fact that Lewinsky, an anti-bullying activist, can now be smoked. She seemed shocked at the picture, though.

In a response to Kosoff, Lewinsky tweeted back: “I said to someone this morning I think I need to have party just for the party favors!”

i said to someone this morning i think i need to have party just for the party favors! 🎉😂

Along with the star-studded reaction, another user on Twitter revealed a mistaken assumption: “I thought you were in the cigar game.”

I thought you were in the cigar game.

The picture Lewinsky sent out for all to see, was posted by SteinFarm, a Seattle-based product and lifestyle photographer, while the weed itself was created by the Seattle, Washington-based cannabis producer, Sugarleaf Farms.

Although the Lewinsky weed does not appear to be sold on the Sugarleaf farms website, it is currently selling for $104 per 14 grams on lemonhaze.com.

The strain of weed appears to have already been around for at least a year, according to a Facebook post from Sugarleaf Farms.