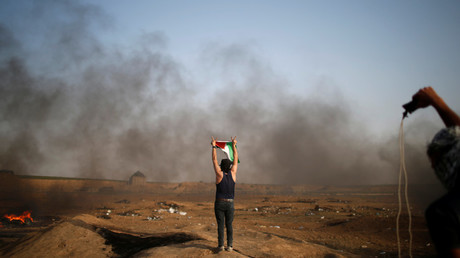 Some Jewish parents were outraged after a New York school decided to hold a minute of silence for the Palestinian protesters shot and killed by Israeli defense forces last week.

Students at Beacon High School were asked to pause for one minute to pay tribute to the victims of the violence, but some parents were angered by the school’s decision to get involved in the divisive Israel-Palestine conflict, The New York Post reported.

The Post had previously reported claims made by a top Hamas official that the majority of the victims of the recent violence had been members of the group which controls the Gaza strip. Israel considers Hamas a terrorist organization.

“I am extremely upset because I did not send my child to a New York City public school to pray for Hamas operatives,” one Jewish father said.

“I am extremely upset because I did not send my child to a New York City public school to pray for Hamas operatives,” a Jewish father said https://t.co/zC4belE1NW

A Jewish mother said she didn’t believe the school should be “promoting a moment of silence for terrorists” and compared the Palestinian protesters to Islamic State (ISIS) terrorists.

“No school would be having that over the loudspeaker,” she said.

The Zionist Organization of America said it was “disgraceful” to mourn the deaths and said it would be writing a letter of protest to the school. One Jewish student at the school said the moment of silence made a lot of her friends feel “very weird” when it began.

Reporting on the controversy, Fox News misleadingly displayed a chyron claiming that the New York school had held a “moment of silence for Hamas” — but some Twitter users were quick to step in and call the story “fake news” for failing to clarify any difference between Hamas and Palestinians.

This is such a perfect example of fake news. They had a moment of silence for the 60+ Palestinians recently killed by Israeli defense forces.

Palestinians are not interchangeable with Hamas, even though that’s the only way your narrative works.

Not all Jewish parents at the school were outraged, however. Rebecca Vilkomerson, who is the the executive director of Jewish Voice for Peace, tweeted that she saw the moment of silence as “a sign of enormous hope” and said she was “incredibly proud” that it had happened at her daughter’s school.

Thread: this is my daughters school! When she told me about the moment of silence on Tues, I was amazed. In the middle of a devastating week it seemed like a sign of enormous hope that something like this could happen in an nyc public school https://t.co/qb2rGtgwmz

Vilkomerson said that her organization would be sending a letter to the school to let them know that many parents were happy with the school’s decision.

Responding to the controversy, Jewish youth activist group IfNotNow said in a tweet that “holding a moment of silence for the victims of a massacre should not be controversial” and added that the Jewish community had “a lot of work to do.”

High school students holding a moment of silence for the victims of a massacre should not be controversial.

Our community has a lot of work to do.https://t.co/isTDkX3pum