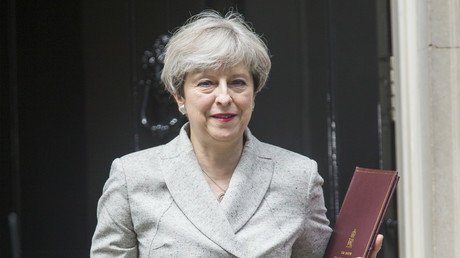 A mocked-up picture of Theresa May wearing a shirt reading: “I oppose abortion in N. Ireland because I’m afraid of the DUP” has gone viral, as she faces criticism for not backing the relaxing of the abortion laws.

The image has been photoshopped from the original, which shows the PM wearing a black shirting adorned with a slogan reading: “This is what a feminist looks like,” an assertion many, including MPs in her own party, are challenging. The pressure comes following the landslide victory of the ‘Yes’ campaign to legalize abortion in the Republic of Ireland.

As Northern Ireland currently lacks a general assembly, Westminster currently has the power to intervene in any governmental issue. May is now being called on by pro-abortion campaigners and a cross-section of MPs to take advantage of the power vacuum and implement pro-abortion legislation.

The shadow attorney general, Labour’s Shami Chakrabarti, said that “This is a feminist test” for the PM, writing in her Times op-ed that women in Northern Ireland “have been let down by privileged women and men for too long.”

And there you have it – the DUP will stop abortion reform in Northern Ireland whatever the will of the people or the human rights concerns of UN. That isn’t devolution. That’s being a dictatorship and overriding public – UK must speak up to #trustallwomenhttps://t.co/wFL3590FYd

Just to be clear, the Lords should sit through the summer as well as MPs. I will be there if so, every day. Starting with Bills to legalise abortion & same sex marriage in Northern Ireland. I am working on a full summer ‘Queen’s Speech’ of 10 Bills, one per week.

May has faced accusations that she is unwilling to interfere due to her reliance to Northern Ireland’s Democratic Unionist Party (DUP) to govern at Westminster. The DUP’s leader, Arlene Foster, said Ireland’s vote to liberalize abortion laws has no influence north of the border.

The meme was widely endorsed on Twitter, with people commenting that May’s assertion she is a feminist is was relative to the political situation.

Theresa May, putting Arlene Foster and the DUP before her feminist principles pic.twitter.com/Geufe2OpZz

She’d need to have some morals for that and all the evidence points to her total lack of them.

When asked if she is a feminist, a PM spokesman failed to respond with a direct yes or no answer, as he pointed to her record in public life and “action she has taken on equal pay, domestic violence, modern slavery and to have greater female representation in House of Commons and elsewhere.”