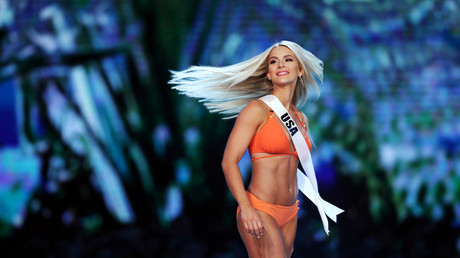 As this year’s Miss Universe competition rolls around, Miss USA has found herself at the center of a storm of controversy, after appearing to make fun of two Asian beauty queens for not speaking English.

In an Instagram livestream that has gone viral for the wrong reasons 24-year-old Sarah Rose Summers can be heard discussing some of the other contestants with Miss Colombia Valeria Morales and Miss Australia Francesca Hung.

“What do you think of Miss Vietnam Nie?” Summers asks the women during the video.

“She’s so cute and she pretends to know so much English and then you ask her a question after having a whole conversation with her and she goes [nods and smiles],” she says before laughing. “She’s adorable.”

At a later point in the stream Summers offers her thoughts on Miss Cambodia Rern Sinat.

“Miss Cambodia is here and doesn’t speak any English and not a single other person speaks her language. Can you imagine?” she asked. “Francesca said that would be so isolating and I said yes and just confusing all the time.”

The video has unleashed a swirl of negative publicity for Summers, who many have accused of failing to grasp the global aspect of the competition.

“The future Miss Universe should not be an ambassador of bullying,” one commenter said.

“This is just a shameful display of meanness poorly masked as empathy,” another wrote. “Clearly none of these women embody what being Miss Universe is all about … and in this day and age?”

Yet some are backing the American pageant queen. “Sad to think that your sorrow towards Cambodia and thoughtfulness towards Vietnam is being perceived in the wrong manner,” a supporter wrote.

Summers issued an apology on her Instagram Thursday morning. “In a moment where I intended to admire the courage of a few of my sisters, I said something that I now realize can be perceived as not respectful, and I apologize,” she wrote, adding that she would be “grateful” for an opportunity to discuss the matter with Miss Vietnam and Miss Cambodia. Presumably not in English.

Summers’ mother also weighed in on the controversy, claiming her daughter’s comments were taken out of context and that she “doesn’t have a mean bone in her body.”

The preliminary rounds of the competition get underway on Thursday and the winner will be crowned on Sunday.