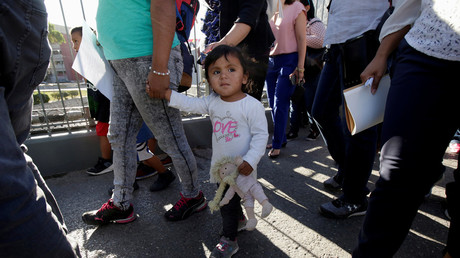 Time magazine faced backlash for misleading readers after the revelation that the crying toddler on its cover was not separated from her parents. This iconic image is not the only one that MSM misused covering immigration limbo.

The powerful cover shows President Trump towering above the sobbing Honduran child with the caption: ‘Welcome to America.” In an accompanying tweet, Time states: ‘A reckoning after Trump’s border separation policy: What kind of country are we?’

The two-year-old child’s father, Denis Valera, has since come forward, however, claiming that his daughter was never separated from her mother, with US and Honduran authorities confirming it. Time has also issued a correction, admitting that the original version of the story misstated what happened to the girl after she was taken from the scene.

“The girl was not carried away screaming by U.S. Border Patrol agents; her mother picked her up and the two were taken away together.”

Despite the correction, Time editor-in-chief Edward Felsenthal is standing by the cover, saying that it is “the most visible symbol of the ongoing immigration debate in America.”

But this is not the first time that impressive images of children were used to tell a story different from the reality to highlight views in the immigration debate, as RT’s Caleb Maupin reports. Thus a picture from a protest happened to represent an image from a detention center, and pictures from Syria were used in a story about the US border.