Minnesota’s measles outbreak has surpassed the number of cases in the whole of the US last year. Health officials and imams in the Somali-American community are working to prevent the spread of the deadly disease during the Muslim holy month of Ramadan.

As of June 1, there were 73 confirmed cases of measles in Minnesota in 2017, the Minnesota Department of Health (MDH) said, compared to a total of 70 recorded measles cases in the entire US in 2016, according to the US Centers for Disease Control and Prevention (CDC). At least 8,250 Minnesotans have been exposed to measles in day care centers, schools, hospitals and clinics, state health officials said.

The vast majority of victims in the Gopher State ‒ 68 of them ‒ have been unvaccinated, and most are preschool children. A significant number have been hospitalized. Of the 73 cases, 60 are in the Somali community.

The outbreak “has nothing to do with being Somali,” Kris Ehresmann, director of infectious disease control for MDH, told CNN. “It’s just the sheer fact of being unvaccinated.”

The anti-vaccine movement has targeted Minnesota’s Somali-American community. At a recent community meeting about the outbreak, an anti-vaccine advocate handed out fliers that claimed “some children suffer permanent brain damage from the vaccine, and some die from it,” Public Radio International reported.

The spread of misinformation about the measles-mumps-rubella (MMR) vaccine’s link to autism has had a devastating effect on the community. Its vaccination rate dropped from 92 percent in 2004 ‒ which was higher than the state average ‒ to just 42 percent.

Much of the disinformation about vaccines in the Somali community comes from British researcher Andrew Wakefield, who first proposed a link between vaccines and autism in a paper which has been widely discredited as fraudulent. Wakefield visited Minneapolis at least three times in recent years, including during a smaller outbreak among the Somali-American community in 2011. During that meeting, he downplayed the severity of the disease, a state health official told the Washington Post.

Autism occurs in about one in 32 Somali children, compared to one in 36 white children, according to a 2013 University of Minnesota report. Citing numerous studies on the MMR vaccine, the CDC states that “there is no link between vaccines and autism.”

The MMR vaccine requires a 90 percent or greater vaccination rate to provide herd immunity against measles, according to the CDC. Herd immunity protects those people who either cannot be immunized due to age or health problems, like cancer, or those for whom the vaccine doesn’t work.

The Somali-American community in Minnesota is predominantly Muslim, and, for the first time, health officials have turned to imams and other Muslim leaders to counteract the effects of misinformation.

“The imams emphasize the role of the parent and the role of faith to keep people safe from any disease ‒ not just yourself, but the entire community and also the state ‒ so people have to be responsible citizens and do their part,” Sharif Mohamed, an imam at a Minneapolis mosque, told the Washington Post. “Health professionals can focus on the linkage between the vaccine and the measles. I think we can win the battle.”

Clinicians from the Children’s Hospitals and Clinics of Minnesota and from the Hennepin County Medical Center are working with a group of 30 imams and mosque executive directors to spread accurate information about both measles and autism. 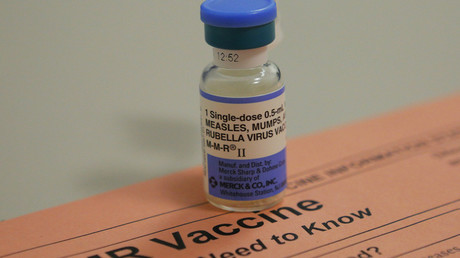 With the start of the holy month of Ramadan on Friday night, health officials are worried that the holiday could worsen the outbreak as the close-knit community comes together in prayer and festivities. The imams they are working with have discussed messaging during each night of Ramadan, as well as holding immunization clinics and educational forums at mosques.

The Muslim leaders “very much shared our sense of urgency about this topic,” Patsy Stinchfield, who oversees infection control at Children’s, told the Washington Post. “They very much confirmed they are allies with us. We are going to work together.”

The disease has also spread beyond the Somali-American community and into Minnesota’s public schools, with six white children contracting measles.

“We don’t see a plateauing” of the outbreak, Stinchfield said. “We’ve geared up for working on this through the summer.”

In mid-May, Minnesota Health Commissioner Dr. Ed Ehlinger asked state lawmakers for $5 million to create a public health emergency fund to address the state’s growing infectious disease crisis. The Gopher State had already spent $3 million responding to “the largest measles outbreak the state has faced in nearly 30 years,” along with tuberculosis and syphilis outbreaks. In 2016, there were only two confirmed cases in the state, both of which were imported due to exposure from outside the US.

There are promising signs for health officials, however. Since the outbreak began in early April, vaccinations are up, even in the Somali-American community. Before then, there was an average of about 2,700 MMR vaccine doses given per week, statewide. Since then, there have been as many as 9,700 doses given in a week. For Somalis between the ages of 2 and 13, MDH typically administered 30 doses a week. Now that number has risen to more than 500 a week, Ehresmann said.