Home surveillance video shows a Minneapolis police officer jump over a fence into the backyard of a private residence and shoot two dogs. The officer claims the dogs were charging at him, but the owner said the footage shows the dogs “weren’t even moving.”

Jennifer LeMay was on a camping trip with her family over the weekend, when her two daughters, ages 18 and 13, decided to leave early. When the girls arrived home on Saturday night, they accidently triggered the alarm system, according to the Star Tribune. LeMay said she called the security company and shut off the alarm within minutes.

According to a Facebook post from LeMay, 40 minutes after the alarm was triggered, two officers with the Minneapolis Police Department (MPD) arrived at the house. One of the officers stayed in front of the house, never knocking on the front door, while the other climbed the seven-foot fence around the backyard where the family’s two dogs, Rocko and Ciroc, were located.

LeMay uploaded footage to Facebook from a surveillance camera that overlooks her backyard. The short video shows the officer approach the house and walk out of view of the camera. Moments later, the officer is seen backing up rapidly with his gun drawn.

When both of the dogs are out of view, the officer leaves the scene, climbing back over the fence.

A police incident report obtained by the Star Tribune claims that “two large size pitbulls charged at the officer,” however, the footage does not show either of the dogs charging.

“Video surveillance doesn’t lie,” LeMay told the Tribune, adding that her 13-year-old daughter saw the whole thing and said that Ciroc was “wagging his tail.”

“My dog wasn’t even moving, lunging toward him or anything,” LeMay added. “My dogs were doing their job on my property. We have a right to be safe in our yard.”

Staffordshire bull terrier, Ciroc, was “quiet,” wagging his tail when he and his brother, Rocco, were shot by a Minneapolis police officer. pic.twitter.com/hYQz40NOeZ

On Sunday, the MPD released a statement that said they are in the process of reviewing the footage that was posted on Facebook, as well as the footage from the officer’s bodycam. The MPD added that an investigation is being conducted by the department’s Internal Affairs Unit. 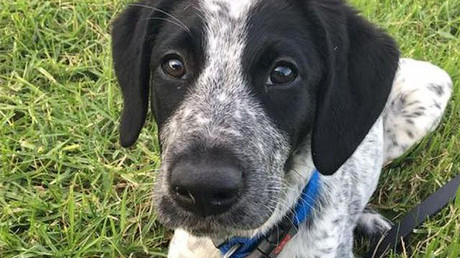 “I’ve watched the video, and as someone whose family has included dogs most of my life, I can say that it was difficult to watch,” Harteau said in a statement. “We are reaching out to the family to help them with the veterinary care bills to ensure that both dogs are adequately taken care of.”

According to LeMay, who posted updates about the dog’s health on her Facebook page, Ciroc was shot once in the head, resulting in a fractured jaw, while Rocko was shot three or four times, none of them striking any internal vital organs.

“His wounds are quite deep but it’s mainly muscle and tissue damage, he truly is a miracle dog,” LeMay wrote in one Facebook post. “I’ve never heard of any animal taking 4 bullets all over his body and surviving!”

On Monday, LeMay said that both dogs were at home, “resting comfortably.” However, she said that Ciroc will still require surgery on his fractured jaw.

LeMay and her four children have had Rocko and Ciroc, both Staffordshire Terriers, since they were puppies. They were prescribed by a physician as emotional support animals for LeMay’s two sons, who suffer from severe anxiety. The breed is one of many commonly referred to as pit bull.

On Sunday, the family created a GoFundMe page to help pay for the dogs’ medical bills. They asked for $15,000, but have received nearly $24,000 from more than 800 people as of Monday evening.