A military investigation into a US airstrike on a mosque in Syria’s Aleppo province found that the strike was “lawful,” even though it likely resulted in the death of a civilian. More than 40 people died in the attack, which targeted an Al-Qaeda meeting.

On Wednesday, US Central Command (CENTCOM) released the findings and recommendations of an internal investigation into the March 16 airstrike in Al-Jinah, Syria. The conclusions were first announced in a series of tweets.

The US initially refused to take credit for the strike, admitting only to striking a nearby terrorist gathering in the bordering Idlib. The Pentagon also insisted that the mosque was still intact, despite video evidence to the contrary. In early May, however, CENTCOM acknowledged that it destroyed the mosque.

The strike hit an al-Qaeda meeting, not a civilian gathering (3/3)

The CENTCOM report outlined the events of May 16. The military commanders received intelligence about a meeting location about a group of “al-Qaeda terrorists and those collaborating with them,” which was confirmed by follow-up surveillance. The decision-makers believed the meeting would take place in “a warehouse, with a shed and residence in near proximity.”

At that point, the military began the targeting process.

“The strike cell followed procedures to confirm that the meeting was a valid military target, ensuring the strike would be proportional, and taking all feasible precautions to minimize collateral damage or civilian casualties,” Major Josh T. Jacques, media operations chief for CENTCOM, said in a statement provided to RT. 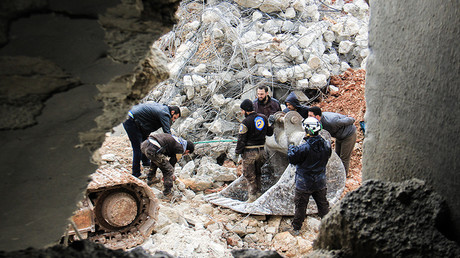 The strike used F-15 fighter jets and MQ-9 Reaper drones to target the warehouse. It caused “superficial damage” to the adjacent mosque. CENTCOM followed up with a secondary strike against “militants who were seen outside the building after the initial strike.”

Approximately two dozen Al-Qaeda members or affiliates were killed, and several others were injured, CENTCOM said. It also resulted in the death of one “non-combatant, who may have been an adolescent.”

An April report by Human Rights Watch (HRW), which was based on witness accounts, said that the mosque had been used daily and saw dozens of people gathering inside during prayer calls. It accused US forces of failing to double check the facts on the ground before launching the strike because “aerial surveillance of the building would have shown this.”

“The airstrike took place in between the sunset and the evening prayer, at a time when US officials should have known that there would be people gathering in the mosque,” deputy director of HRW’s Middle East and North Africa division, Lama Fakih, told RT in April.

The human rights organization did not find any evidence that would have backed up the claim that an Al-Qaeda meeting was being held there.

READ MORE: Aleppo mosque airstrike controversy: ‘US only considers sources credible when it suits them’

The CENTCOM investigation found that the warehouse should have been placed on US-led coalition’s “No Strike List,” which would require a higher level of consideration before a strike could be approved.

“This failure to categorize the building correctly did not affect the legality of the strike however; the investigation found the strike complied with all operational and legal requirements,” Jacques said.

Overall, the CENTCOM investigation “identified some critical information gaps that contributed to misinformation and an overall lack of understanding of the situation,” he said. In the end, investigators recommended an unspecified “series of systemic improvements” to help the team better interpret the intelligence and “most effectively aid decision makers.”

“Ultimately, we struck our intended target and eliminated more than two dozen al-Qaeda terrorists. The strike was lawful,” Jacques said, describing the attack as “a blow to al-Qaeda in Syria.”

“We also remain committed to learning from situations such as this to improve our targeting processes and procedures in order to prevent the unnecessary loss of life,” he added.