This week, the Trump military parade, planned for November 10, was canceled for 2018. In February, a coalition of groups went public, announcing we would organize to stop the military parade and, if it went forward, to mobilize more people at the parade calling for peace and an end to war than supporting militarism. The coalition called for “ending the wars at home and abroad.”

The No Trump Military Parade coalition intended to show the world that the people of the United States do not support war. The coalition has been meeting regularly to build toward organized mass opposition to the proposed parade. People were working to make this protest a take-off for a renewed peace movement in a country exhausted by never-ending wars and massive military spending, but our first goal was to stop the parade from happening. 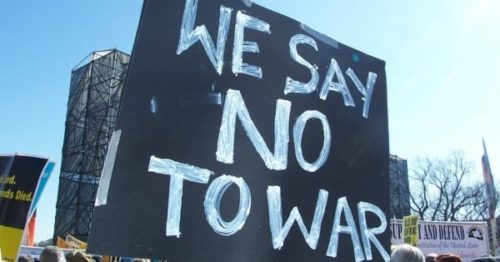 The protest turned into a weekend of activities linked with the October 21 Women’s March on the Pentagon. The Women’s March was planning to include a daily vigil at the Pentagon until the military parade protest weekend. The theme of the weekend was “Divest from War, Invest in Peace.” On Friday, November 9, we planned a nonviolent direct action training for those…