A local police department in Michigan is under scrutiny for tasering a suspect who was holding a two-month-old baby. While the child was left unharmed, social media users criticized the department’s use of excessive force.

Responding to a report about a possible physical assault of a woman, the Westland Police Department rushed to Raymurez Brown’s residence on Friday night. When officers arrived at the scene, they found Brown having a barbecue with friends. According to officials, Brown was yelling and confronting people outside his home. Telling the officers that they had the wrong house, the suspect then allegedly began an argument with representatives of the force.

In a video of the incident which surfaced online, police are witnessed telling the man to “get the baby out of here” as they threaten to arrest him. “That’s my child. He can be exactly where he’s at. Give me my child. Give me my child,” Brown says in response. Police then surrounded the suspect and tried to force him to release the child.

Before anyone realized what was happening, police tasered the man, just as his girlfriend and mother of the child grabbed the baby before Brown hit the ground. “They tased him with the baby in his hands? Y’all some… Oh my god!” a witness is heard yelling. 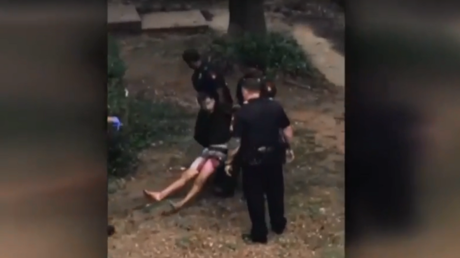 “As soon as they started tasing him, the baby fell out of his hands, I had to grab him, or he would have fell,” Brown’s girlfriend, Nichole Skidmore, told WXYZ-TV on Sunday.

Police on Monday, however, contradicted Skidmore’s assessment of the incident, noting that the officers had to take action to protect the child from the man who appeared intoxicated and refused to cooperate with authorities. The baby was not injured when the man was tasered, police said.

According to Police Chief Jeff Jedrusik, the man’s grip on the baby was so tight that the officers became concerned that Brown might injure the child. “It’s important to remember that due to this man’s noncompliance, our officers were faced with a difficult tactical decision on how to take this man into custody and ensure the safety of the baby,” Jedrusik said, noting that the officers were ready to secure the child.

Following the incident, Brown was taken into custody and was charged with disturbing the peace, hindering a police investigation, and assault and battery on a police officer.