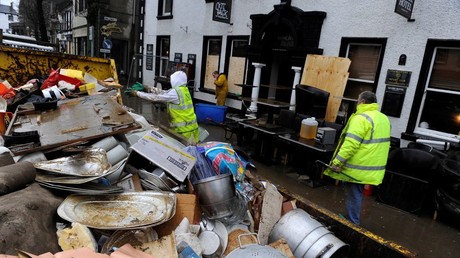 According to the Sunday Times, Gove’s waste strategy plan, due to be put forward to government next month, includes allowing people to visit council rubbish dumps for items they can reuse such as old appliances or furniture.

“We must reduce the amount of material we waste,” Gove is said to have told a meeting. “At the moment if I take something to the dump for which I have no use but which you could happily have picked up and reused then you are not allowed to.”

“It is not an answer to everything but greater reuse is one way to ensure that pressure on resources diminishes. I do not want to go full ‘Good Life’ but resource efficiency is good for the economy,” he said.

Sounds bad but he has a very good point ! Others peoples rubbish can be reused, repaired or used for parts…

Why all the negativity? This is a good idea – I often see things at the ‘recycling center’ I can use.

One might be hard pushed to find a environmentalist poking fun at recycling, but Gove’s name is toxic in some circles because of his role in pushing for Britain to leave the European Union.

Many have taken to Twitter to ridicule his comments, claiming that rooting through rubbish is an allegory for a Tory Brexit.

“Panic over. We’re going to be fine,” quipped, LBC radio host, James O’Brien. “Climbing through rubbish heaps in hopes of finding something valuable… Not just a metaphor for Brexit, but part of the actual plan,” Human Rights Watch media director, Andrew Stoehlein, added.

Michael Gove, February 2016: “By leaving the EU we can take control. We can show the rest of Europe the way to flourish.”