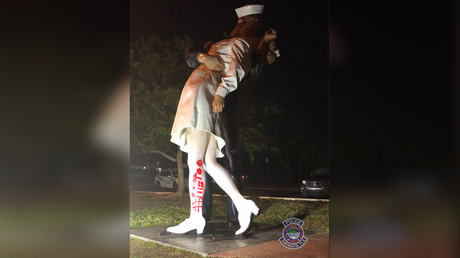 A statue that pays tribute to an iconic image of a US sailor kissing a nurse at the end of WWII was spray-painted with a ‘Me Too’ hashtag – but was this acceptable activism, or the work of out-out-touch vandals?

The vandalism occurred a day after George Mendonsa, the sailor who famously planted a kiss on a woman in Times Square, New York, while celebrating the announcement that Japan had surrendered, died at the age of 95.

The vandalized statue, in Sarasota, Florida, was modeled after the passionate embrace. A famous photograph of the spur-of-the-moment smooch was later revealed to be not quite what it seemed. The pair did not even know each other, and Mendonsa had simply grabbed and kissed the woman, a dental assistant dressed in her uniform, believing that she was a nurse from the war.

Noting that the act was not consensual, Everson insisted that the statue was fair game for the #MeToo movement.

“Anything that does not reflect who we are trying to become, as a country, as a people – it can’t stand,” she said. “Whether she was swept up in the moment or not, we do not see this as a fitting activity to celebrate.”

Drawing a parallel to Confederate statues that have been removed in recent years, Everson concluded: “It’s okay for us to look at history and say, ‘this is not who we choose to be.’”

Also on rt.com
‘Don’t want to get into that’: Democrats’ #MeToo double standard on Kavanaugh and Fairfax


Fellow RT panelist, Jennifer Breedon, an international law expert and human rights attorney, disagreed, stating that our current “divisive” culture doesn’t understand the intent and context of the encounter. She further noted that unlike acts of civil disobedience by the civil rights movement, the #MeToo vandals were not protesting unjust laws.