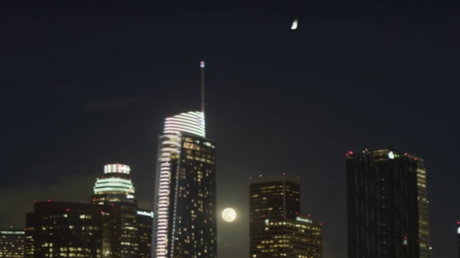 The persistent bright light occurrence over downtown Los Angeles on Wednesday night confused the public, some of whom thought they were experiencing visions of extraterrestrials. Others wondered if they were observing an imminent meteoric impact. The online chatter was so intense that LAPD was forced to step in and remind the public that they live at the heart of the Hollywood movie industry.

“A meteor did not crash into Downtown Los Angeles, and no, it’s not an alien invasion…just a film shoot. This is Tinseltown after all,” the force said.

The film shoot which frightened thousands across America’s second biggest city was, in fact, the first-ever wingsuit jump into downtown Los Angeles by a team of Red Bull Air Force stuntmen.

Wearing wingsuits fitted with LED lights and glowing pyrotechnics, the three-man team made quite an entrance at 120mph after jumping from a helicopter 4,000 feet above Los Angeles to perform the spectacular stunts. Flying high above skyscrapers the Red Bull team managed to film and observe a rare super moon phenomenon reigning over the city of angels, before finally deploying their parachutes and landing safely on the streets below.