A petition calling for a two-way arms embargo on Israel following what has been branded the “merciless killing” of scores of Palestinians over the past two months has garnered thousands of signatures.

It’s organizers claim that the UK’s ongoing trade with Israel makes it “complicit” in the state’s “continuing violations of human rights and international law” in the occupied Palestinian territories.

Israel has faced widespread criticism over its use of live ammunition against mostly peaceful Palestinian protesters in Gaza over the past 60 days. Protesters from the enclave were marching for the right to return to their land, from where they or their ancestors were expelled or fled from during the Arab-Israeli war and subsequent creation of the State of Israel in 1948. 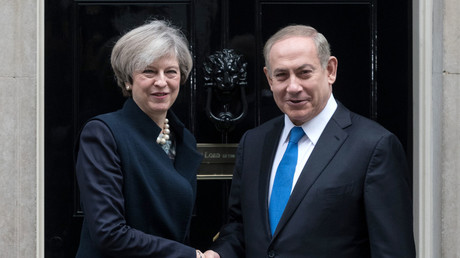 The bloodshed in the past 60 days, which saw 128 Palestinians killed, was the worst since the 2014 Gaza war, which claimed the lives of 2,104 Palestinians, while 67 Israeli 67 and six civilians were killed, the UN reports.

Israeli Prime Minister Benjamin Netanyahu claimed the Israel Defense Forces (IDF) were acting in self-defense against Hamas, the ruling party in Gaza which is considered a terrorist organization by the EU and the US.

Huda Ammori, from Palestine Action and who launched the petition, told RT: “The petition started as a response to the merciless killings of Palestinian people by the Israeli regime. During the last 2 months, over 120 Palestinian protesters have been murdered by Israel.

“The Palestinians were marching to demand their freedom, their basic rights as stipulated under international law.

“Despite Israel’s constant violations of international law and the basic principles of human rights, the UK does not hold any sanctions against the apartheid state.”

While British Prime Minister Theresa May branded the recent “loss of life” as “tragic and concerning,” she has failed to back calls to end UK arm sales to Israel.

Ammori claimed that rather than taking Israel to task, Britain “has continued to sustain Israel’s army, including the exports of sniper rifles, hosting Israel’s arms factories and more.”

“The UK government must end the complicity with Israel’s war crimes and impose an immediate two-way arms embargo between the UK and Israel.”

She told RT: “I hope for the UK to impose an immediate arms embargo between the UK and Israel and to accelerate the Boycott, Divestment and Sanctions Campaign, which seeks to pressure Israel into complying with international law and the basic principles of human rights.”

It comes as the UN holds an emergency meeting on Wednesday to consider a draft resolution condemning what it calls Israel’s “excessive use of force.” It resembles the resolution, put forward by Kuwait at the beginning of the month at the UN Security Council, which got rejected when the US, a major ally of Israel, vetoed it. The UK abstained.

The petition has so far garnered more than 6,800 signatures. It needs 10,000 to require the government to respond, following which it will be reviewed by the Petitions Committee, a group of 11 MPs from government and opposition benches. The committee has the power to press government for action and to propose it for debate in Parliament.