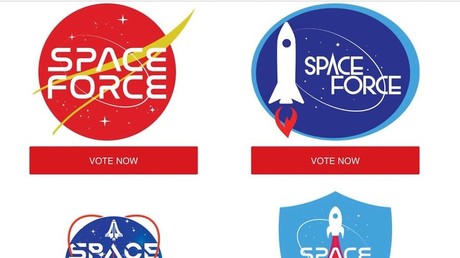 President Donald Trump’s proposal to create the US Space Force will take years to implement at best, but that’s not stopping his re-election campaign from fundraising with branded merchandise. Critics are not amused.

Just hours after Vice President Mike Pence announced at the Pentagon that the target date for establishing the Space Force is sometime in 2020, the Trump-Pence re-election campaign sent out an email soliciting donations from their supporters, asking them to pick a favorite Space Force logo for campaign merchandise.

Five of the six logos proposed have the words “Space Force” on them, while the sixth says “Mars Awaits.” One of the designs is clearly based on the current logo of NASA, the civilian US space agency.

The Hill and a reporter for NBC News tweeted out screenshots of the campaign email containing the designs, prompting a torrent of reactions from the president’s critics. In addition to angry comments denouncing the very idea and several attempts at memes, the responses contained alternate proposals for a Space Force logo – including the Federation symbol from Star Trek and the Galactic Empire logo from Star Wars.

The Trump campaign has proven itself skillful at merchandising, with their red baseball cap emblazoned with the campaign slogan “Make America Great Again” becoming one of the most omnipresent symbols of the 2016 US presidential campaign.