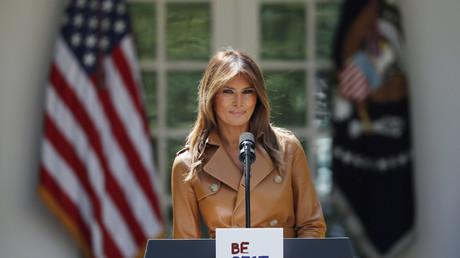 Melania Trump was mocked after she unveiled a new initiative for children called, ‘Be Best.’ The first lady was accused of using incorrect grammar, plagiarism and she even had her accent criticized.

Trump revealed the program during a speech in the White House Rose Garden on Monday. The Be Best initiative is aimed at combating online bullying, promoting healthy lifestyles and preventing opioid abuse.

The name of the initiative, Be Best, was mocked on social media, as a number of Democrats said it was an improper use of English. Although it is highly unlikely that Trump came up with the name herself, that didn’t stop some elements of the left from claiming the inaccurate grammar was as a result of the fact that English is not her first language.

seriously, I know that English isn’t your first language, but BE BEST is totally ding dongy. How about Be your Best?

#BeBest does @FLOTUS speak English? What is that slogan supposed to mean? Lordy.

Comedian Jimmy Kimmel also criticized the initiative during his show on Monday. “‘Be Best’ is the slogan. I think there must be a thought missing, right? There must be a word?” he said. “It was either going to be ‘Be Best’ or ‘Do Goodest,’ and they went with ‘Be Best.’”

Melania, you need better administrative assistance. “Be Best” is improper English. It should read “Be The Best”. And whoever was supposed to write the pamphlet, should be fired. They just changed the logo on the Obama’s pamphlets. Hire someone from a marketing firm to help you.

Please choose from below…

a) Be the Best
b) Be your Best

‘Be Best’ is not grammatically correct. (And it sounds silly to native listeners.) if you’re not sure what to do then use the article (e.g. ‘the’) or possessive (e.g. ‘your’.)

It should be #BeBetter or #BeTheBest. #BeBest is not grammatically correct.

Was this a direct translation from Slovenian?

“Be best” is nonsensical in English.

Some social media users even took swipes at Trump’s speech and made fun of her level of English. Many on the right called out those who teased her about her accent, highlighting the fact that the first lady speaks multiple languages.

She’s probably smarter than you so you should probably shut up. pic.twitter.com/gUzKAyFWhb

Maybe that’s the only two words she can say clearly. My bad.
Plus it’s a pisspoor slogan.

does she keep saying “Viking cuddle class” is part of her program? i honestly can’t understand what she’s saying.

Melania really unveiled #BeBest during #TeacherAppreciationWeek with broken English and a rag tag sign that looks like it was painted by Kindergarteners in the dark whose cookies were confiscated. Bless. pic.twitter.com/IexcAJJmqa

I’m sorry with all trump fake money couldn’t they get the Fake First Lady English Lessons, she sounds like a stupid Idiot ! @FLOTUS#Melania#bebest

She speaks 5 languages. English is her 5th language. She not only has beauty but brains as well. And Michael oops I meant Michelle has…well when I think of something she’s good at I will get back to you. Don’t hold your breath lol. May take awhile..

Perhaps the harshest criticisms Trump received were over allegations of plagiarism, and it is not the first time. While President Donald Trump commended his wife’s effort, many were quick to point out the similarities between it and one released by the Obama administration.

Melania’s Cyber Bullying booklet was Copied directly from the FTC’s booklet That the Obama Admin released.

They say that Imitation is the sincerest form of flattery.

Fun fact: The White House trumpets “Talking with Kids about Being Online” as “a booklet by First Lady Melania Trump and the Federal Trade Commission.” Except for an intro, it’s exactly the same thing Obama’s FTC put out. pic.twitter.com/AEf6F0gBbt

The White House issued a statement in response to the reaction Trump’s speech generated. “After giving a strong speech that was met with a standing ovation and positive feedback, the focus from opposition media has been on an educational booklet, ‘Talking with Kids About Being Online’ produced by the Federal Trade Commission (FTC) in 2009,” White House communications director Stephanie Grisham said in a statement. “Mrs. Trump agreed to add Be Best branding and distribute the booklet in an effort to use her platform to amplify the positive message within.”

“Despite providing countless outlets with ample background, information, and on-the-record comments from the FTC, some media have chosen to take a day meant to promote kindness and positive efforts on behalf of children, to instead lob baseless accusations towards the First Lady and her new initiatives,” she said.

In 2016, Michelle Obama encouraged men to “Be Better” pic.twitter.com/RtSz1tmETO

In 2016, Michelle Obama encouraged men to “Be Better”. pic.twitter.com/YRMb0TGgnH

To some, her Be Best initiative was a bit too close to comments made by former First Lady Michelle Obama, who said men should ‘Be Better.’