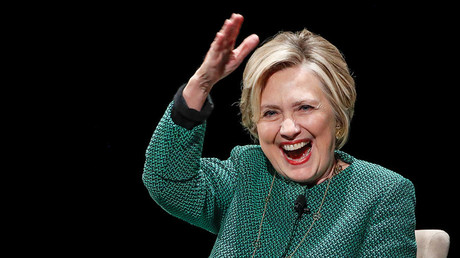 Meghan McCain has hit back at Hillary Clinton’s comments blaming her election loss on white women who were afraid to defy their Trump-supporting husbands and sons by voting for her.

Clinton made the odd comments in Mumbai during a three-day trip to India. It’s just the latest in a long line of excuses the former presidential candidate has given in interviews to explain her election loss to Donald Trump.

McCain, who is the daughter of US Senator John McCain (R-Arizona), said that Clinton needed to come up with a “better excuse” than that to explain her defeat.

“It’s one thing to lose to President Obama. It’s an entirely other thing to pull off losing to President Trump. And you gotta come up with a better excuse than this,” McCain said on ABC’s daytime talk show ‘The View’, which she co-hosts. “The Clintons are a virus in the Democratic Party. You have to move on,” she said.

Against some pushback from the mostly liberal panel, McCain said Clinton ran “one of the worst campaigns ever” and warned Democrats that Clinton’s was a bad message to be sending ahead of the mid-term Congressional elections which will be held in November.

“If your messaging is that you want to go back in time, that women can’t think for themselves, that our husbands, bosses, and sons tell us what to do, that’s quite the message going forward into midterms and [the] general election,” she said.

She argued that “anti-Washington” and “anti-establishment” sentiment, as well as poverty and the economy, had more to do with Clinton’s defeat than things like sexism and race. “If the Democratic Party is the party of the Clintons, you are dead in the water,” McCain said.

McCain isn’t the only one angry at Clinton over her recent comments, however. Democrats, including her own former aides and advisors, are lining up to criticize her.

“She put herself in a position where [Democrats] from states that Trump won will have to distance themselves from her even more,” one former senior Clinton aide told The Hill. “That’s a lot of states.”

“She’s annoying me. She’s annoying everyone, as far as I can tell,” a former Clinton surrogate is reported to have said. “Who lets her say these things?”