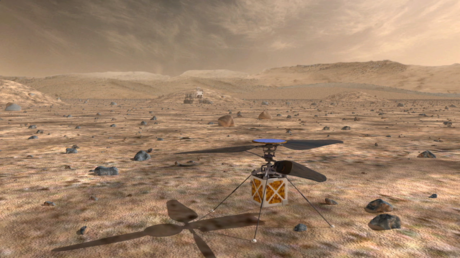 A robot helicopter will fly the skies of Mars as part of the 2020 mission, NASA has announced, hoping to replicate the success of the Wright brothers on the red planet.

The ‘marscopter’ will be one of the components of the Mars survey mission scheduled to blast off in July 2020, the US space agency announced on Friday. It is supposed to fill in the important gap in observation capability between the ground rovers and orbital imaging probes.

“The ability to see clearly what lies beyond the next hill is crucial for future explorers,” said Thomas Zurbuchen, associate administrator at NASA’s Science Mission Directorate in Washington, DC. “We already have great views of Mars from the surface as well as from orbit. With the added dimension of a bird’s-eye view from a ‘marscopter,’ we can only imagine what future missions will achieve.”

The helicopter looks like “a medium-size cubic tissue box,”according to NASA’s Jet Propulsion Lab (JPL) in Pasadena, California, which designed it. Initial specifications called for the prototype to weigh 2.2 pounds (1 kilogram) with a blade span of 3.6 feet (1.1 meters). After four years of design and testing, the production model ended up weighing just under 4 pounds (1.8 kilograms).

Mars has only 38 percent of Earth’s gravity, but its atmosphere is vanishingly thin compared to Earth’s, so the biggest challenge was to design a vehicle that is both light and powerful enough, according to Mimi Aung, the Mars Helicopter project manager at JPL.

For concerned people (the atmosphere!) – check out this video – they’ve already demonstrated it in the vacuum chamber in Mars-like conditions: https://t.co/Q3IgGzWIKy

“The altitude record for a helicopter flying here on Earth is about 40,000 feet. The atmosphere of Mars is only one percent that of Earth, so when our helicopter is on the Martian surface, it’s already at the Earth equivalent of 100,000 feet up,” said Aung.

To cope with that, the marscopter’s twin counter-rotating blades will spin at almost 3,000 revolutions per minute (rpm), almost 10 times the rate of an Earth helicopter.

The sheer distance between the planets makes remote piloting impractical, Aung said. “Instead, we have an autonomous capability that will be able to receive and interpret commands from the ground, and then fly the mission on its own.”

Solar cells will charge the helicopter’s lithium-ion batteries, and a heating mechanism should keep it from freezing in the cold Martian nights.

NASA Administrator Jim Bridenstine described the prospect of a helicopter flying the skies of another planet as “thrilling,” while Zurbuchen compared the mission to the Wright brothers pioneering flight at Kitty Hawk, North Carolina, in 1903.

“After the Wright Brothers proved 117 years ago that powered, sustained, and controlled flight was possible here on Earth, another group of American pioneers may prove the same can be done on another world,” he said.

The helicopter will be attached to the Mars 2020 rover, and deploy once the probe reaches the red planet. The mission is scheduled to take off on the United Launch Alliance (ULA) Atlas V rocket from Cape Canaveral in Florida, and reach Mars in February 2021.