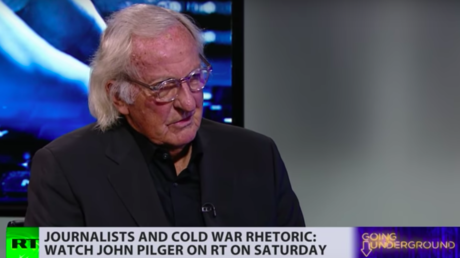 Investigative journalist John Pilger has called out the “grotesque absurdity” of those in the Western media who hype the so-called threats from Russia and China to Cold War levels, in an interview with RT’s Going Underground.

Pilger told RT’s Afshin Rattansi that he finds it “difficult to believe” how some journalists “should go along, should allow themselves to be indulged by the British government at a time when there is a litany of lies about Russia, about China — about so many issues that endanger us.”

“I’ve never known such a grotesque absurdity as the elevation of Russia and China and the perceived enemies to the kind of Cold War status they had when I was a child,” he said.

Pilger also discussed the growing scandal around the UK government-funded Integrity Initiative which had posed as a charity fighting disinformation, but had been conducting secret influence campaigns across Europe and working hand-in-glove with selected journalists to maintain high levels of anti-Russian sentiment within the mainstream media.

The full interview with Pilger will air on Saturday on RT.