The New York Times (1/29/18) changed its headline to avoid the implication that ending an occupation after 17 years was a “quick exit”–but still describes the possibility as a “hasty American withdrawal.”

After “six days of some of the most serious Afghan peace negotiations to date,” US government and Taliban officials have agreed in principle to preliminary foundations of a deal, the “biggest tangible step toward ending” the war, the New York Times (1/28/19, 1/26/19) reported this week.

As described by US special envoy Zalmay Khalilzad, a longtime neoconservative architect of Hamid Karzai’s installation as Afghan president following the US invasion in 2001, the Taliban would guarantee that Afghan soil would never again be used to plot a terror attack against the United States. The US would then fully withdraw its troops, in return for a ceasefire and direct negotiations between the Taliban and Afghan government. This framework agreement comes a month after President Donald Trump announced the withdrawal of 7,000, or about half, of US troops from Afghanistan. (Trump increased troops in Afghanistan from roughly 8,400 to 14,000 in 2017.)

Certainly this sounds like good news, a chance to end the United States’ longest overseas war, one that has cost nearly $1 trillion and some 100,000 lives—a war that, in its 17th year, even the foreign policy elite admit “cannot be won” (Council on Foreign Relations president Richard Haass, Project Syndicate, 1/14/19).

The Washington Post’s editorial board (1/28/19) was similarly apprehensive at the prospect of US withdrawal. Lamenting what it considered a deal brokered “mostly on the enemy’s terms,” it proclaimed that “an end to the Afghan war is desirable, but not at the expense of everything the United States has helped to build there since 2001.”

Michael Hirsh, senior correspondent for Foreign Policy (1/29/19), asked, “Will Zalmay Khalilzad Be Known as the Man Who Lost Afghanistan?” He wrote that the framework deal “has raised fears that the United States is in a rush for the exits” because “it appeared to accede to at least a partial US withdrawal in exchange for no real concession from the Taliban.” Similarly, Vanda Felbab-Brown, senior fellow at the Brookings Institution (1/29/19), warned, “Simply negotiating a speedy US withdrawal brings little joy to Afghanistan.”

While several of the eight “experts” interviewed by the New York Times (1/29/19) theoretically supported negotiating with the Taliban—couched behind “cautious optimism” about the talks—none advocated US withdrawal as prerequisite for a peace deal, a condition the Taliban have consistently demanded.

“Perhaps the greatest concern raised by the American officials, many with years of experience fighting the Taliban, is how the United States would enforce the deal and protect its counterterrorism priorities,” the Times reported:

Mr. Trump, who is hungry for a foreign-policy victory after the government shutdown, may not have the patience to wait for the diplomacy with the Taliban to bear fruit. And once the troops are gone, the ability of the United States to influence events will rapidly ebb.

Accepted without question by the Times is the idea that the US has a right to “enforce” a deal, or should have the “ability to influence events” in a country 7,000 miles away from its borders, or that doing so would materially contribute to the peace effort in Afghanistan.

Whenever Trump expresses an interest in reining in US troop deployments—albeit for his own self-serving, nationalist goals—the foreign policy establishment and its stenographers in corporate media have reacted with outrage, especially over US policy in Syria (FAIR.org, 1/11/19).

The obvious implication of media’s concern trolling over any withdrawal plan, in Syria and now in Afghanistan, is that the US should indefinitely occupy multiple countries to maintain as much “leverage” as possible. A permanent war state with an ever-expanding array of military bases across the globe ensures imperial hegemony and ensures record-breaking profits for private military contractors. 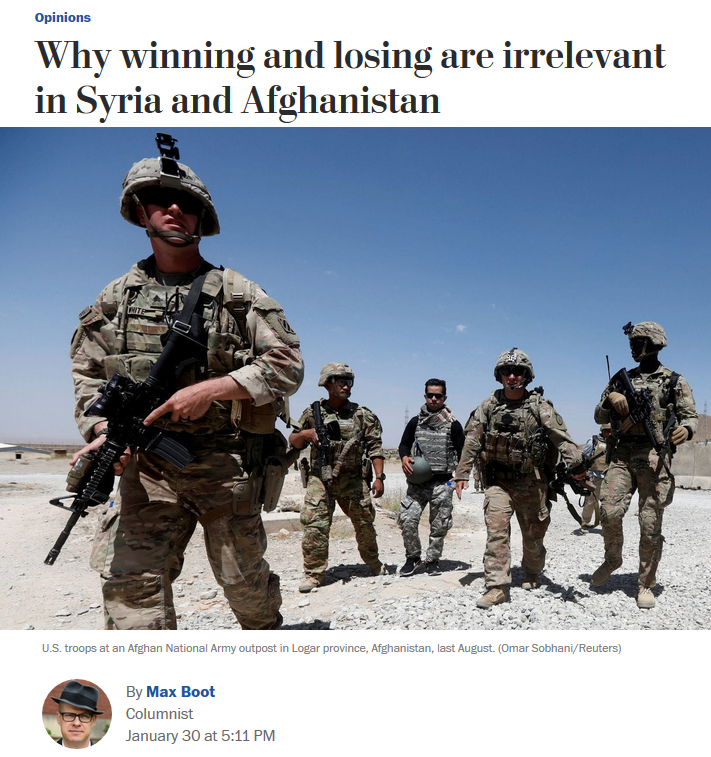 Max Boot (Washington Post, 1/30/19) urged the US public to accept a long-term occupations of Syria and Afghanistan by comparing them to the genocidal “Indian Wars, which lasted roughly 300 years.”

“These kinds of deployments are invariably lengthy and frustrating,” Washington Post columnist Max Boot (1/30/19) wrote in an effort to reassure us:

Conditions on the ground could certainly get worse after a US withdrawal, but that could easily be the case with or without American troops deployed throughout the region. Often forgotten among those who advocate for forever wars is that these very wars are the greatest contributor to chaos and instability in the first place, with Iraq (which the US occupied for nearly a decade) as a prime example.

Accordingly, media must grapple with a stark fact: The 17-year US war in Afghanistan has drastically escalated violence in the country. There is very little the US can do now to mitigate the suffering of Afghans beyond negotiating a peace deal with the Taliban and the national government, predicated on a full withdrawal of US troops. As the Taliban have made clear for years, the former is impossible without guarantees of the latter.

Despite media’s agonizing over a potential drawdown of American empire, it’s still unlikely that Trump will ever withdraw completely from Afghanistan. If he moves forward with his plans, he will likely leave a residual force of a few hundred or thousand troops to maintain US bases and an ability to strike al Qaeda and the Islamic State, analogous to US military presence in Yemen or Somalia. Meanwhile, massive American bombing of the country would continue. Although under these circumstances, Trump would likely claim credit for “ending” the US war in Afghanistan, this scenario would not constitute an actual end to US military intervention.