It’s a rare occasion that mainstream media turns its attention to a third party presidential candidate and gets them on-air. Attacking them over ‘collusion’ with Russia? In this case, an exception may be made.

The former Green Party presidential candidate Jill Stein gave an interview to CNN, explaining her campaign’s decision not to hand over all documents requested by the Senate Intelligence Committee, relating to contacts and discussions with Russians in the run-up to the 2016 election. 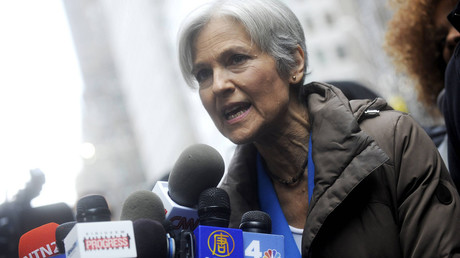 Stein said her campaign handed over most documents to the Senate committee’s probe into alleged Russian interference in the election, but partly objected to the request for communications with “Russian persons, or representatives of Russian government, media, or business interests.” Stein argued that the request was too broad and targeted people simply “because they happen to be Russian immigrants or of Russian descent.”

“We thought that where requests were made that violated basic constitutional protections, that wasn’t a good idea, not for anybody, and we did not want to be part of setting a precedent that intrudes further on our civil liberties,” she explained to CNN’s Chris Cuomo.

But CNN reporter Jeremy Herb wasn’t having any of it. In a piece about Stein’s decision, Herb admitted that Stein has “not been accused of wrongdoing or colluding with the Russians” but pointed out that her political views “often align with the Kremlin.”

Those views include her positive opinion of WikiLeaks founder Julian Assange and her distaste for the concept of ‘American exceptionalism’ and illegal US military operations overseas. Herb’s framing of his comments makes it sound almost as though the Kremlin is the only other place where people are against US militarism and his implication, of course, is that Stein is some sort of subversive or is a Kremlin puppet.

Netanyahu pushed US to invade Iraq, falsely claiming Iraq had WMDs. Now he’s trying to pull the same exact trick with Iran. Don’t get fooled again by this far-right warmonger.

Interestingly, CNN rarely gives any airtime at all to Stein and other third-party politicians — unless of course, it’s to suggest nefarious links to the Russian government and to castigate them for their political beliefs.

Jill Stein is on @NewDay right now repeating Russian talking points on its interference in the 2016 election and on US foreign policy.

Stein’s so-called ‘connection’ to the Russia investigation began from a complete nothingburger. In 2015, she attended a dinner hosted by RT in Moscow to celebrate the channel’s ten-year anniversary. Ever since a photo of that event emerged in 2016, it has been used to accuse her of somehow being in cahoots with Moscow.

The conspiracy theories vary, but one is that the Kremlin wanted Americans to vote for Stein in order to split the vote on the left, making it more likely that Trump would win the election — and Democrats still can’t forgive Stein for having the audacity to run for office and take votes away from Hillary Clinton.

Jill Stein had dinner with Putin, so… GET THE GUILLOTINE! That’s how we roll in this country now. Didn’t she know it’s illegal to eat with Russians?

Stein’s attorney, Mara Verheyden-Hilliard, who works for the Washington-based Partnership for Civil Justice, said her client’s campaign had provided documents detailing communications with Russian government representatives, but not “Russians” in general. Verheyden-Hilliard dismissed the broader request as “a hunt for identification of persons based on nationality or descent.”