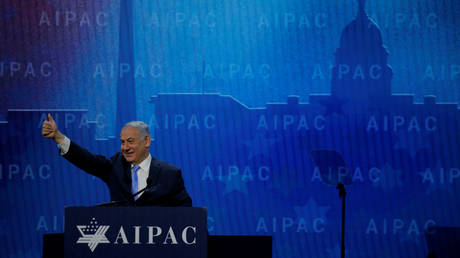 Pro-Israel lobbyists funneled more than $22 million into the 2018 US election cycle, making the lobby far more active and influential than those aligned with other foreign nations, public records show.

Controversy was sparked last week after freshman Minnesota congresswoman Ilhan Omar tweeted that pro-Israel money affected the decisions of members of Congress. Omar faced swift backlash and condemnation even from her own party, as her colleagues rushed to label her comments as “outrageous,” “disgraceful” and even“anti-Semitic.”

In the aftermath, the Guardian examined figures available from the Center for Responsive Politics – a D.C.-based organization which tracks money in politics –  and found that the Israel lobby is indeed “highly active and spends heavily” to influence lawmakers.


In response to a tweet from a Jewish journalist asking who she believed was “paying American politicians to be pro-Israel,” Omar specifically highlighted the influence the American Israeli Public Affairs Committee (AIPAC). While AIPAC does not donate directly to political campaigns, it does spend millions on lobbying.

Indeed, the publicly available data shows that AIPAC – which lobbied against the Iran nuclear deal in 2015 and supported Trump’s withdrawal from it in 2018 – spent more than any other pro-Israel lobbying group. AIPAC spent more than $3.5 million on lobbying during the 2018 election cycle and over $5 million in the year in total — which was the highest since tracking began in 1998.

The powerful group is also known for taking newly elected members of Congress on junket trips to Israel which the Intercept called“incredibly influential” in that they provide new House members with a “distinctly pro-Israel viewpoint on complex controversies” in the region.

On the Democratic side, those trips are usually led by House Majority Leader Steny Hoyer, who has received $1.02 million from pro-Israel groups during his career, according to CRP figures.

Pro-Israel groups and individuals gave nearly $15 million to political campaigns during the 2018 election cycle, the highest since 1990, with the J Street Pac giving the highest amount of $4.03 million. About $2.1 million was also spent on political activity by pro-Israel foreign agents registered under the Foreign Agents Registration Act in 2017 and 2018.

To my knowledge, CNN has never produced an in-depth investigation of the Israel lobby’s influence over American politics. That might be because it would require investigating itself:

Dan Auble, a senior researcher at CRP, told the Guardian that he has not observed many other countries that have “a comparable level of activity” in terms of domestic lobbying.

It’s not just a handful of politicians receiving the pro-Israel money, either. In fact, the Israel lobby donates to the majority of politicians, spending money on 269 House representatives’ and 57 senators’ campaigns last year.

Interestingly, the Guardian noted that Democrats who demanded an apology from Omar coincidentally received some of the highest levels of contributions from the pro-Israel lobby.

Democrat Eliot Engel, who chairs the House Foreign Affairs Committee (of which Omar is now a member), accused her of invoking an “anti-Semitic trope” by suggesting that money from pro-Israel groups affects political discourse. Engel has received $1.07 million from the Israel lobby during his career – more than he’s received from any other industry. House Speaker Nancy Pelosi has received $514,000 and Long Island Rep. Lee Zeldin, who called Omar’s tweet “sick & twisted” has received nearly $330,000 from pro-Israel groups.

The Guardian also highlighted the fact that there’s probably“far more pro-Israel lobby money flowing into American politics” than what is publicly tracked by groups like CRP, given that “dark money nonprofits” aren’t required to disclose who their donors are. Billionaire Sheldon Adelson gave $250,000 to the Republican Coalition Jewish Victory Fund last year, for example, but that donation is not factored into the CRP tallies.

While the pro-Israel lobby spends relatively little in comparison with some other major industries, it spends far more in the foreign policy realm than PACs aligned with other countries – and over the decades, the money poured into US politics from pro-Israel groups has reached into the hundreds of millions, according to CRP.

For its efforts, Israel receives up to $4.5 billion in annual aid from the US, including the $3.8 billion promised every year for a decade under a deal signed by the Obama administration and about 700 million allocated by Congress last year to support Israel’s missile defense systems – a good return on investment, by any standards.