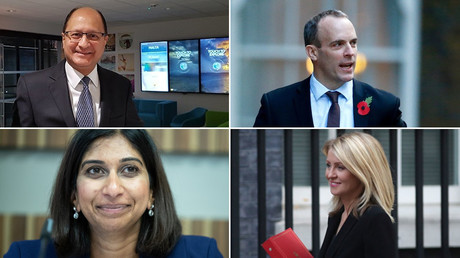 Seven high profile resignations have followed on the heels of Theresa May’s announcement that her cabinet has settled on a Brexit deal, with Labour claiming that the Conservative government is at risk of completely dissolving.

Shailesh Vara, the Minister of State at the Northern Ireland Office was the first top official to resign after the prime minister announced that her cabinet had reached a draft EU withdrawal agreement.

READ MORE: A few more resignations and we’ll get rid of ‘duplicitous’ PM May – Nigel Farage

An hour after his announcement, Brexit Secretary Dominic Raab – the man charged with negotiating and finalizing the deal – said he was stepping down, stating that the Brexit deal in its current form suffers from deep flaws. Esther McVey, Secretary of State for Work and Pensions, submitted her letter of resignation shortly afterwards. More resignations have followed.

Any cabinet member who is a genuine Brexiteer must now resign or never be trusted again, this is the worst deal in history.

Labour’s shadow Cabinet Office minister, Jon Trickett, predicted that this is the beginning of the end for May’s government.

The government is falling apart before our eyes as for a second time the Brexit secretary has refused to back the prime minister’s Brexit plan. This so-called deal has unraveled before our eyes

Shailesh Vara: UK to be stuck in ‘a half-way house with no time limit’

Kicking off Thursday’s string of resignations, Vara didn’t mince words when describing his reservations about the cabinet-stamped Brexit deal.

Theresa May’s EU withdrawal agreement leaves the UK in a “halfway house with no time limit on when we will finally become a sovereign nation,” his letter of resignation states. Vara went on to warn that the draft agreement leaves a number of critical issues undecided, predicting that it “will take years to conclude” a trade deal with the bloc.

With much sadness and regret I have submitted my letter of resignation as a Northern Ireland Minister to the Prime Minister. A copy of my letter is attached.
It has been a joy and privilege to serve in the Northern Ireland Office and I will always cherish the fondest memories. pic.twitter.com/SN8j4OwhYD

“We will be locked in a customs arrangement indefinitely, bound by rules determined by the EU over which we have no say,” he added.

Dominic Raab: Deal can’t be ‘reconciled’ with promises made to public

Announcing his resignation on Thursday morning, Brexit Secretary Dominic Raab tweeted: “I cannot in good conscience support the terms proposed for our deal with the EU.”

Today, I have resigned as Brexit Secretary. I cannot in good conscience support the terms proposed for our deal with the EU. Here is my letter to the PM explaining my reasons, and my enduring respect for her. pic.twitter.com/tf5CUZnnUz

Raab claimed that the deal in its current form gives the EU veto power over the UK’s ability to annul the deal.

“It sounds like he has been ignored,” he told the BBC.

Raab’s departure will undoubtedly encourage other Brexit supporters to question the deal, political commentators have observed.

Work and Pensions Secretary Esther McVey didn’t hold back when issuing her own letter of resignation. According to McVey, the deal “does not honour” the result of the Brexit referendum, in which a majority of Brits voted to leave the European Union.

Suella Braverman, a junior minister in Britain’s Brexit ministry, issued her resignation on Thursday, saying that she couldn’t stomach the deal.

“I now find myself unable to sincerely support the deal agreed yesterday by cabinet,” she said in a letter posted on Twitter.

Braverman said that the deal is not what the British people voted for, and threatened to tear the country apart.

“It prevents an unequivocal exit from a customs union with the EU,” she said.

There was another by mid-afternoon, Rehman Chishti has stepped-down as the Vice-Chair of the Conservative party stating that he “cannot support” the draft EU Withdrawal deal.

Along with Chishti the trickle of resignations also included Ranil Jayawardena, Ministry of Justice PPS, and Anne-Marie Trevelyan, Department of Education PPS.