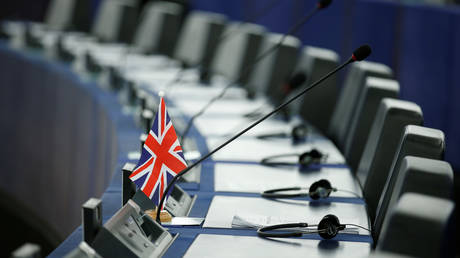 Theresa May urged MPs “to do a patriotic thing” and vote for her Brexit deal unless they want leaving the EU to take months, “if ever.” The last-ditch appeal comes as the Corbynites vow another confidence vote if the deal fails.

The UK prime minister didn’t sit idle this weekend, trying to win the hearts and minds of stubborn MPs who last week rejected the Brexit deal she agreed on with the EU.

If her plan is backed before Thursday’s EU summit, she would seek “a short technical extension” beyond the March 29 deadline to leave the bloc, May wrote in the Sunday Telegraph.

Also on rt.com
Brexit delay makes sense ‘only if UK says what the plan is’ – German FM


Admitting that it will not be “an ideal outcome,” May argued that “it is something the British people would accept if it led swiftly to delivering Brexit.” Otherwise, “we will not leave the EU for many months, if ever.”

That aside, the British people face the prospect of going to the polls to elect members of the European Parliament in May – an obligation which comes with the UK’s extended membership in the EU.

“There could be no more potent symbol of Parliament’s collective political failure,” the Prime Minister wrote.

Last Tuesday, MPs overwhelmingly rejected May’s Brexit divorce plan. On Wednesday, they voted against leaving the EU without a deal, and on Thursday the Parliament urged the prime minister to ask Brussels for a delay.

The delay will be short if May’s deal is eventually approved by Parliament and becomes law. A longer delay – which May cautioned against – could be used by UK leaders to try to negotiate a completely new deal, prolonging the Brexit saga for another year or so.

Also on rt.com
‘To portray him as a victim goes against their narrative’: UK journo slams media over Corbyn attack


Meanwhile, time is running out for May’s cabinet to sort the withdrawal deal out. Labour leader Jeremy Corbyn said the opposition would force a confidence vote in her government it the deal is defeated again.

“I think at that point a confidence motion would be appropriate. At that point we should say there has to be a general election,” he told Sky News.