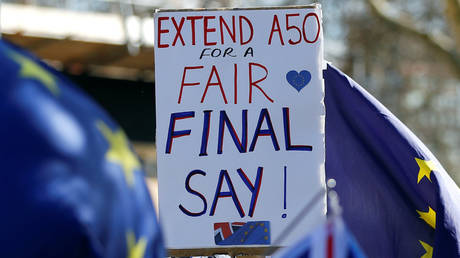 PM Theresa May will allow UK MPs a free vote on extending Article 50 and delaying Brexit beyond the current March 29 deadline. It comes as the Tory government have been left reeling after two days of heavy defeats in parliament.

Tonight’s vote represents day three of a series of Brexit votes that has seen May’s deal inflicted with the fourth biggest defeat (149) in parliamentary history and MPs comprehensively instruct the government to rule out a no-deal scenario.

The government motion to extend Article 50 beyond the official Brexit deadline day, seeks a delay until June 30, on the condition MPs back May’s negotiated deal by March 20.

A majority of parliamentarians are reportedly in favor of extending Article 50, which would in normal times see the motion voted through. However, the House Speaker, John Bercow has selected four amendments that could scupper its smooth passage through the house of commons.

(e) Jeremy Corbyn’s Labour Party have tabled a proposal, similar to the first, insisting on Article 50 being extended to allow time for MPs to find a majority for a different approach to Brexit.

(h) Sarah Wollaston, who recently quit the Conservatives to form The Independent Group of MPs has put forward a plan, calling for a Brexit delay long enough to hold a second EU referendum. It will represent the first time MPs have ever voted on such a proposal.

(i) Tabled by a group of cross-party backbench MPs including Labour’s Hilary Benn and the Tories’ Oliver Letwin that seeks to wrestle control of the Brexit process from PM May. It proposes to hold a series of indicative votes scheduled for March 25, on an alternative approach to the UK’s exit from the EU.

(j) Chris Bryant, Labour MP for the Rhondda, has put down a rather cheeky amendment, demanding that the prime minister be forbidden from putting her deal, which has been heavily defeated twice, to parliament to vote on again.

On Thursday, President of the European Council Donald Tusk took to social media to reveal that he will be appealing to the EU27 members to remain open to the idea of offering the UK a long extension period, if they need time to rethink their Brexit strategy.

During my consultations ahead of #EUCO, I will appeal to the EU27 to be open to a long extension if the UK finds it necessary to rethink its #Brexit strategy and build consensus around it.

The prospect of a long extension period would be the stuff of nightmares for hardline eurosceptics, worried that Brexit may never happen and could strengthen PM May’s hand as she pushes to get her deal over the line.

Conversely, ‘People’s Vote’ campaigners could see such a scenario as an opportunity to convince MPs for the case of putting the decision to leave the EU back to the British people.

Also on rt.com
British MPs vote in favor of ruling out a ‘no-deal’ Brexit (VIDEOS)


According to an official for President Emmanuel Macron, France will not support delaying Brexit if it simply means revisiting May’s Withdrawal Agreement, insisting it is “out of the question.”

“So it’ll either be a no-deal now, or a change of plan from London, of which we see no sign at the moment,” the official added.