UK Prime Minister Theresa May appears ready to get the UK involved in a possible military strike against Syria without seeking the Parliament’s approval, the BBC reports citing “well-placed sources.”

May reportedly sees an “urgent” need for a response, according to government insiders. She also appears to believe a military intervention will prevent further chemical incidents in Syria. 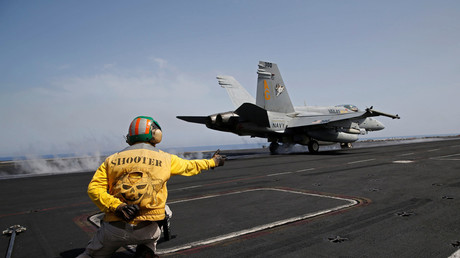 May’s reported willingness to jump on board the looming strike, which the US says it is still making up its mind on, comes despite the fact that no investigation has yet been carried out into the alleged chemical incident in Syria’s Douma, which fired up Western governments openly supporting the forces seeking to oust Syrian President Bashar Assad. While a number of anti-government groups, including the so-called White Helmets, have accused Assad of waging a new chemical attack on civilians, Damascus and Moscow have dismissed the incident as a staged act. With Douma being the last Islamist-occupied town in eastern Ghouta, which the Syrian Army has recently liberated from militants, and Damascus having been engaged in talks with the Jaysh al-Islam group now leaving the area, there was no logical justification for such an attack offered by those accusing Assad.

The absence of proof seems to have made May reluctant to jump to war immediately, at least according to a report by the Times, which suggested that she requested “more evidence” during private phone calls with US President Donald Trump. This is despite public statements by May and her government officials claiming that there were “all the indications” that the Syrian government was responsible for the yet-unverified incident.

May’s spokesman declined to comment on the BBC’s report.