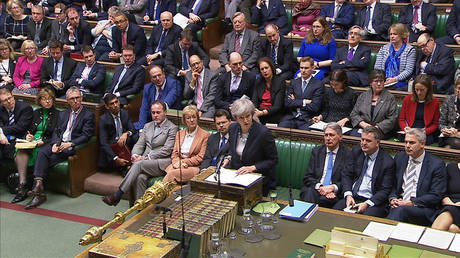 UK PM Theresa May reveals her Brexit ‘Plan B’ to parliament on Monday in a bid to garner the support of a majority of MPs to get an agreement through the House of Commons and avoid a no-deal withdrawal scenario.

The prime minister’s original Brexit deal put to parliament was overwhelmingly rejected by a majority of 230 MPs on Tuesday. The UK is scheduled to leave the EU on March 29.

May says there were six issues that came up when she conducted cross-party discussions on the best way forward for Brexit negotiations.

The first concerned the issue of a no-deal Brexit. She insists the best way to avoid such a scenario is by approving a deal.

The second issue, May says, was on a second referendum pushed by certain opposition leaders. She claims a ‘people’s vote’ would be voted down by MPs in the house of commons.

The PM insisted that there could be some progress on the other four issues. On the Irish backstop, May ruled out reopening the Good Friday agreement. She told parliament that she needed to find out what MPs wanted changed on the backstop.

Also on rt.com
‘£171,000 being spent every hour on no-deal Brexit’: Corbyn lashes out at ‘wasteful’ UK govt


May revealed that her government has decided that the £65 fee for EU nationals applying for settled status in the UK is to be abolished.

Labour leader Jeremy Corbyn responded to the PM’s statement by saying that her attempted cross-party talks were a “sham” – adding that May was in denial about the severity of the defeat of her Brexit deal in parliament last week.

He once again called on May to rule out a no-deal Brexit to which the PM argued that she needed further talks with MPs to secure a deal.

Vince Cable the Liberal Democrats leader, asked May what the “rules of engagement” would be for the 3,500 army personnel on standby as part of no-deal preparations. The PM insisted that these troops would be used to replace others such as those on guard duty.

Tory pro-remain MP and ‘people’s vote’ advocate Anna Soubry, slammed the PM telling her “this just isn’t good enough,” as the UK is being turned “into a laughing stock.” She added: “the truth is, nothing has changed.”

It comes after Poland’s Foreign Minister Jacek Czaputowicz suggested that a time limit of around five years could be applied to the Irish backstop in order to see a deal concluded and a no-deal scenario avoided, the Telegraph reports.

Simon Coveney, the Irish deputy PM, has responded to the comments by insisting the Polish FM was trying to be “helpful,” but that his solution to the backstop did not reflect EU thinking.

Irish deputy PM Simon Coveney says the Polish foreign minister, who suggested the backstop could be limited to 5 years, was trying to be ‘helpful’ but that his idea doesn’t reflect EU thinking. Adds if UK changes its red lines the EU will respond ‘generously’.

Earlier on Monday, EU chief negotiator Michel Barnier claimed that the UK-EU withdrawal agreement is “the best possible deal,” including the controversial Irish backstop, in an interview with Irish broadcaster RTE.