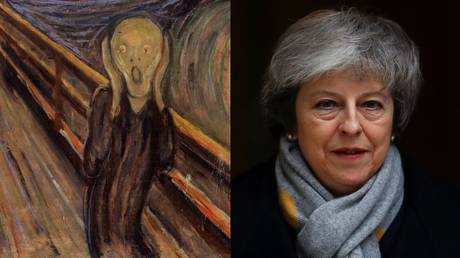 Wednesday’s viral remarks on “hell” for Brexiteers are “not helpful and have caused widespread dismay” in Britain, Prime Minister Theresa May has told EU Council President Donald Tusk.

Addressing reporters after crunch talks with EU officials in Brussels, May revealed that she had raised the issue with Tusk, imploring the EU chief to work in a more conciliatory manner.

May told reporters: “The point I made to him was that we should both be working to ensure that we can deliver a closer relationship between the United Kingdom and the European Union in the future.”

Tusk lashed out at the UK government on Wednesday during his joint press conference in Brussels with Irish Prime Minister Leo Varadkar. He wondered out loud what the “special place in hell” looks like for those who pushed for Brexit without coming up with a clear plan to deliver it.

The comments were met with a barrage of criticism from pro-Brexit MPs. The DUP’s Brexit spokesperson, Sammy Wilson MP, unleashed a damning appraisal of Tusk, labeling him a “devilish, trident-wielding euro-maniac.”

Former UK Brexit Secretary David Davis joked on ITV’s Peston program that Tusk may be joining Brexiteers in hell. He argued that Tusk’s remarks said more about him than it did about the people he was “insulting.”


Former UKIP leader Nigel Farage responded to Tusk’s comment on Twitter insisting: “After Brexit, we will be free of unelected, arrogant bullies like you and run our own country. Sounds more like heaven to me.”

It comes after Theresa May and the President of the EU Commission Jean-Claude Juncker released a joint statement revealing that they had conducted “robust but constructive” discussions on the Brexit deal and would stage further talks to find a consensus.

For his part, Juncker told reporters that his job was “hell” in an apparent nod to crumbling negotiations.