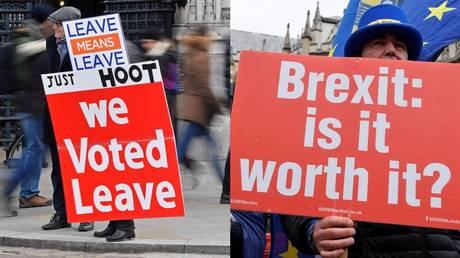 The UK Parliament will vote on the Prime Minister Theresa May’s Brexit plan on Tuesday. Labour is calling for a new election if it’s rejected, while both Brexiteer Tories and pro-EU Remainers could sink the deal.

Tensions remain high as the vote on May’s long-fought EU divorce plan is scheduled for Tuesday. In what many saw as a last-ditch effort to save the deal, the PM urged parliament to back the withdrawal roadmap, painstakingly negotiated with EU leaders last year.

MPs should allow the government to “deliver for the British people” and focus on building “a brighter future” for the nation post-Brexit, May argued during heated debates in the House of Commons on Monday.

Over the next 24 hours, give this deal a second look. No, it is not perfect, and yes, it is a compromise.

Theresa May’s appeal didn’t go down well with the Labour opposition and some fellow Tories, who insist that the proposed deal hurts the country. Labour Party leader Jeremy Corbyn said that the government is “in disarray” and called for a general election in the event of May’s plan being voted down.

We’ve seen a divided government deliver a botched withdrawal deal with nothing more than a vague outline for what our future relationship with the EU will be.

The UK managed to finally secure a Brexit roadmap with the EU last fall. The deal immediately propelled the government into a full-blown crisis as several top cabinet ministers resigned in protest. Brexit Secretary Dominic Raab and Secretary of State for Work and Pensions Esther McVey were among those who left office. “I cannot in good conscience support the terms proposed for our deal with the EU,” Raab wrote at the time.

Also on rt.com
7 resignations and counting: May’s government ‘falling apart before our eyes’ over Brexit deal


The vote in parliament on the Brexit plan was originally due to take place in December but the PM made a last-minute decision to postpone the crucial vote for five weeks. Theresa May’s critics said it was done out of fear that the deal would be rejected by the MPs. This move also triggered a no-confidence vote for the prime minister, which May survived.

Now May faces another confidence ballot if the Brexit deal is rejected on Tuesday. Pro-Brexit Tories indicated that they will join Labour in sinking the terms agreed by the PM and the EU.

“We plan to vote no to everything: all amendments and the main motion, whether or not amended,” Conservative MP Steve Baker wrote on Sunday, dispelling rumors that the Brexiteers would back May.

MEP for Wales Nathan Gill told RT that the vast majority of MPs are actually Remainers – those who want to stay in the EU. They also pose a problem for the prime minister, he said.

The Ramainers are doing their best to “galvanize their support” and “grasp with their fingernails” a way to stay within the EU when the British public had clearly voted in 2016 to leave, Gill stressed.

David Collins, professor of international economic law at the City, University of London, told RT UK that it’s “very unlikely” that Theresa May’s withdrawal plan will go through the parliament.

Britain is expected to officially leave the EU on March 29.