Theresa May has appointed Dominic Raab as the new Brexit secretary, whom she once had to slap down for claiming that feminists were “amongst the most obnoxious bigots,” following David Davis’ shock resignation on Sunday night.

The prime minister wasted no time in replacing the outgoing secretary of state for exiting the European Union, but who exactly is Dominic Raab? RT takes a look at the new Brexit secretary’s background – and various controversies he’s been embroiled in.

Raab, 44, grew up in leafy Buckinghamshire, attending his local grammar school, Dr Challoners in Amersham. He then embarked on a career in law with City firm Linklaters, which is currently ranked the 10th largest law company in the world, with revenue exceeding £1.3 billion (US$1.7 billion). 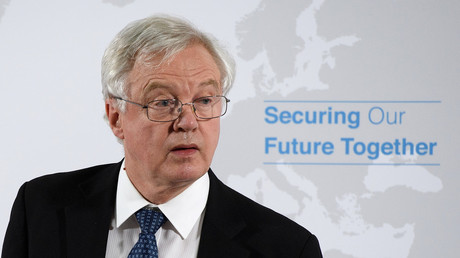 In 2000, he went on to work for the foreign and commonwealth office as a diplomat, before transferring to work as chief of staff for two shadow Tory ministers in 2006 for three years, most notably for David Davis. In 2010, he became Conservative MP for Esher and Walton in Surrey.

After stints as justice minister under David Cameron and housing minister under the Tory leadership of Theresa May, Raab now has the somewhat unenviable job of picking up the UK Brexit negotiating baton from Davis, with a little under eight months till Britain is scheduled to officially leave the EU – with a ‘no deal’ becoming an ever more realistic prospect.

Raab is a fervent pro-Brexit Tory minister, an advocate of free-market economics who comes from the right of the Conservative party. He is seen by many within his party as a rising star who has the potential to be a future leader.

During May’s time as minister for women and equalities, Raab wrote an article for Politics Home in which he claimed that men were getting a “raw deal” in the workplace, telling the Tory-led coalition government they had to make maternity leave “transferable” between men and women if it wanted to tackle “anti-male discrimination.”

He then expressed frustration at the commonly-held view that women were being discriminated against in the workplace, claiming that “Feminists are now amongst the most obnoxious bigots.” May condemned Raab’s comments, telling him that they were “not the way forward” to tackle sexism in the workplace.

He also claimed the typical Foodbank user is “not in poverty,” just has “cashflow problems”

During the run up to the 2017 general election, Raab took part in a live TV debate with the public on the BBC’s Victoria Derbyshire show. After being questioned by a studio guest on why British citizens were having to resort to using foodbanks, Raab insisted that “the typical user of a foodbank is not someone who is languishing in poverty, it is someone who is having a cashflow problem,” to the dismay of many audience members.

Raab’s description of food bank visitors as those with temporary “cashflow problems” shows a complete failure to understand the difficulties of working people in this country. The very people who will be economically knee-capped by Brexit.

Co-wrote book stating: “The British are among the worst idlers in the world”

According to Guardian feature writer Andy Beckett, in essence, the book from Raab and his right wing Tory colleagues claim that “raw capitalism” is the only economic model to adopt, and people must start to work much harder – implying that Britons aren’t already doing so. “We can all graft,” says Raab.

In what may be a startling conclusion to many Brits, Raab and his pals suggest that productivity is low due to early retirement and the laziness of UK workers who needed to stop focusing on football and pop stardom.

“The British are among the worst idlers in the world. We work among the lowest hours, we retire early and our productivity is poor. Whereas Indian children aspire to be doctors or businessmen, the British are more interested in football and pop music.”

I assume Dominic Raab will bring the ethos of Britannia Unchained into his new office – in which he complained that British workers are lazy and too hard to properly exploit. I expect he views Brexit as a way to fix that…

“At least it’s not Grayling” is about as positive as I can be about Raab.

In February 2018, Raab as housing minister advertised for an unpaid intern to carry out constituency work for him, on the eve of the government publishing its plan to tackle unfair working practices – the only sitting MP at the time to offer a parliamentary job unpaid.

The department for business, energy and industrial strategy (BEIS) issued a statement on the Taylor review, charged with reporting on unfair working practices, which appeared to put the official government line at odds with Raab’s unpaid job vacancy.

“Exploitative unpaid internships should not exist and we will work to eradicate these,” a BEIS statement reads. “An employer cannot avoid paying someone the minimum wage simply by calling them an ‘intern’ or saying that they are doing an internship.”

Raab will be hoping he’ll actually have a team to work with on his first day managing the department for exiting the EU, after Brexit Minster Steve Baker quit shortly after his boss, David Davis. There had also been rumors that fellow Brexit Minister Suella Braverman had followed Baker and Davis out of the door on Sunday night, but at the time of publishing, no confirmation of her resignation has been made.