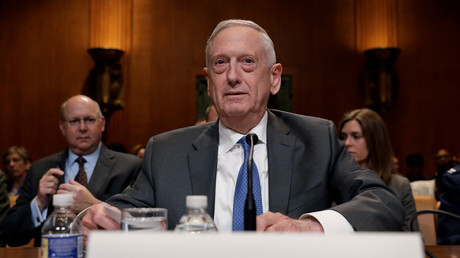 US Secretary of Defense James Mattis says the US intends to continue working with its allies to prevent Tehran from gaining nuclear weapons. However, he might not find allies that are willing to help.

“We will continue to work alongside our allies and partners to ensure that Iran can never acquire a nuclear weapon, and will work with others to address the range of Iran’s malign influence,” Mattis said on Wednesday before a Senate Appropriations Committee hearing. “This Administration remains committed to putting the safety, interests, and well-being of our citizens first.”

Despite his comments, Mattis may find allies, and former co-signatories of the 2015 Joint Comprehensive Plan of Action (JCPOA), more commonly known as the Iran nuclear deal, unwilling to play along. P5+1 members France, Britain and Germany have all condemned Trump’s unilateral decision on May 8 to withdraw from the agreement and have pledged to continue working with Tehran.

Given the widespread condemnation of the US decision to both withdraw from the JCPOA and reimpose previous economic sanctions against Tehran, the respective Middle East strategies on both sides of the Atlantic appear to be at odds, for the time being, undermining Mattis’ comments.

UK Foreign Secretary Boris Johnson told parliament on Wednesday that, given Trump’s hasty and unilateral decision to renege on the nuclear deal, the onus was on the US to provide and describe, in detail, a suitable alternative solution to manage the countries’ “shared concerns.”

“President Trump said himself last night that he is committed to finding a new solution and we should hold him to his word… The question is: how does the U.S. propose to achieve it?” Johnson said, adding that the UK remained committed to the JCPOA, “for as long as Iran abides by the agreement.”

Johnson added that the UK would suggest a new follow-on agreement that would preserve the central tenets of the original deal, while pressing Iran on major issues such as ICBM (intercontinental ballistic missile) development, which Trump singled out in his announcement as being of particular concern to US interests.

Meanwhile, French government spokesperson Benjamin Griveaux told reporters that the EU may go to the World Trade Organization (WTO) if the US economic strategy towards Iran causes collateral damage to European interests.

“The European Union is ready to challenge at the WTO any unilateral measure that would hurt the interests of European companies and respond in a proportionate manner, in accordance of course with the rules of that international organisation,” Griveaux said.

French President Emmanuel Macron said Wednesday that he spoke with Iranian President Hassan Rouhani on Wednesday to reaffirm France’s commitment to the original deal, but that Tehran must respect the accord in its entirety if the EU coalition is to succeed in keeping the agreement intact.

German Foreign Minister Heiko Maas said the US had offered no alternative solutions before its sudden withdrawal from the international accord.

“We want to keep in place the controls and transparency rules,” Maas said Wednesday during a news conference, adding that “it is totally unclear what the U.S. envisages as an alternative to the deal that prevents Iran from developing nuclear weapons while being able to verify compliance.”