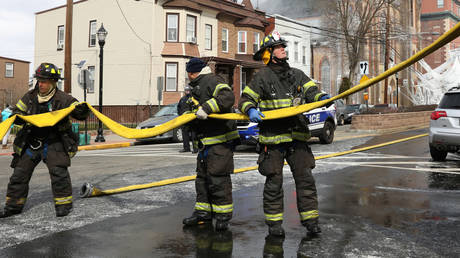 An 8-alarm fire broke out at a Marcal paper factory in New Jersey, engulfing multiple buildings and producing a plume of smoke visible on weather radar as firefighters’ work was complicated by freezing weather.

The massive Elmwood Park blaze quickly spread to multiple buildings, threatening homes and businesses as first responders wrestled with weather-induced complications ranging from frozen pipes to water freezing on their skin. Over 100 firefighters were on the scene.

The fire reportedly began around 5pm in the factory that manufactures toilet paper, tissues, and paper towels. While no injuries have been reported, embers from the inferno are being blown far and wide by polar vortex winds, endangering the factory’s neighbors.

Smoke from the enormous conflagration was clearly visible on weather radar, extending all the way across two rivers to Long Island, New York.

This is not the first fire at the Marcal factory, Police Chief Michael Foligno said. “It’s a paper mill, so it happens a lot.”

A fire on the factory’s roof earlier this month – possibly caused by a crane removing an extension cord – burned for about two hours.

Grateful to all our first responders bracing the cold to fight a seven-alarm fire in Elmwood Park tonight. New Jersey is grateful for your service. https://t.co/Hld7DHcEZn