A huge likeness of UK Prime Minister Theresa May giving Europe the offensive hand gesture was briefly erected atop the White Cliffs in Dover on Monday morning.

Pictures show the Tory leader hanging from a crane flipping the Vs across the English Channel, dressed in the Union flag.

The effigy, which was soon taken down, was erected in St Margaret’s.

Although its origins are currently unknown, Samantha Stanley told Kent Online: “They were putting up the scaffolding on Friday and over the weekend but Mrs May went up early this morning.

“They were filming it with a drone when we walked past at about 8:45am.”

Not everyone was impressed with the stunt. One onlooker said the tone was inappropriate as Brexit negotiations are due to start 11 days after the June 8 general election. 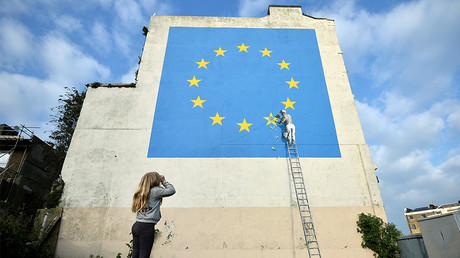 “Whether you agree or disagree with Brexit, it was crass, vulgar and insulting to any Europeans coming into Dover on the ferry and a ridiculous message to send to Europe when we are about to start negotiating our exit from the EU,” Simon Hare told the paper.

It is also unclear at this stage whose land the effigy was built on.

The National Trust insisted it is not part of its extensive coastal site.

It is the second time in recent weeks that Dover has become the focus of a Brexit-themed stunt.

Just last month, acclaimed British street artist Banksy created a mural depicting a worker chipping away at a star on the European flag.

The graffiti was located on the Castle Amusements building, near the ferry terminal that connects the UK to the rest of Europe through the Channel Tunnel.

People have flocked to Twitter to mock the effigy of the prime minister, with one user parodying it by recreating a “model” of Jeremy Corbyn.