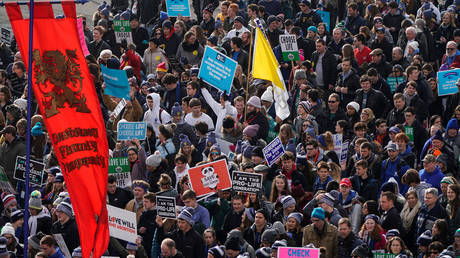 The March for Life, a yearly protest against abortion, claims it brought over 100,000 supporters to DC, though mainstream outlets reported a fraction of that turnout even as the Vice President graced the march with his presence.

Vice President Mike Pence personally addressed the throngs of marchers, praising the “most pro-life president in American history” for nominating conservative judges to the Supreme Court. Claiming the pro-life crowd had made progress winning Americans’ “hearts and minds,” he announced that “This will be the generation that restores the right to life in America.”

Trump addressed the crowd in a video touting his victories against abortion, including reinstating the so-called “Mexico City Policy” to ban aid to groups that “support or promote abortion around the world.” He also sent a letter to Congress warning them he would veto any legislation loosening restrictions on abortion rights or “that encourages the destruction of innocent human life at any stage.”

Today @POTUS sent a letter to Congress promising to veto any bill that weakens current pro-life policies and laws. The Administration remains committed to protecting the rights of the unborn – the right to life. We must continue to give a voice to the voiceless.@March_for_Lifepic.twitter.com/0ZRE6vtECF

Crowd size estimates varied widely depending on one’s ideology. Organizers expected at least 100,000 marchers to attend, and some estimates put the number as high as 200,000 or even 300,000. The conservative Gateway Pundit slammed USA Today for its low estimate of “more than a thousand” –which they eventually revised upward to “thousands.” CNN was eventually shamed into covering the march as well, though they avoided reporting any numbers at all.

While I live-streamed, several commenters asked how many people I thought were in the #MarchForLife crowd.

Too many to count, that’s for sure, folks!

The March for Life has taken place every year since 1974 on the anniversary of Roe v. Wade, the Supreme Court decision that legalized abortion in the US. The year’s theme – “Unique from Day One” – couched the usual movement rhetoric in scientific language, stating on its website that “our uniqueness as individuals” begins at fertilization and that “science is on the side of life.”

In previous years, marchers have entered the Capitol to push the pro-life cause to members of Congress, but the government shutdown – now in its 28th day – makes it less likely they’ll encounter any stray lawmakers.