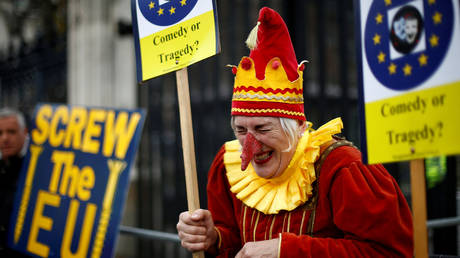 Two years ago, the British government invoked Article 50, starting the countdown to its break away from the European Union. The deadline has now arrived, but the coveted exit is nowhere near to materializing.

In a perfect world, the Leavers would be celebrating their wish come true today, shaking hands and toasting the newfound independence of Great Britain from the money-sucking, overreaching bureaucracy of Brussels. Sure, there’d be some caveats – bad divorces tend to hit one in the pocket – but nothing that this resilient nation couldn’t handle.

Remainers might have shed a tear or two before moving on. After all, their opponents had won the referendum fair and square, and democracy is supposed to resolve issues at the ballot box instead of causing riots and civil wars.


Back to reality, Brexit Day has been postponed until at least April 12. Instead of saying goodbyes and see-you-agains to people on the continent, British legislators are franticly voting for a third iteration of the Brexit deal. If approved, it would postpone the departure day by 40 more days, which hopefully would be enough for parting ways with the EU with a semblance of order. Earlier, MPs rejected all alternative options that the government suggested on how to move forward.

“I don’t think we should blame [the day] for the mess that we’ve made of Brexit. It’s not March 29’s fault; it’s a perfectly good day,” one guy in London told RT.

And the Brexit saga itself?