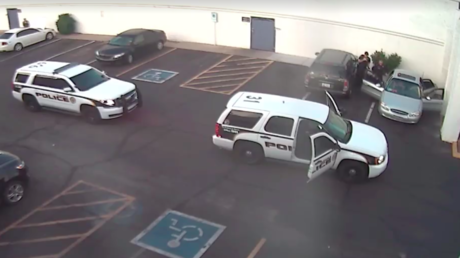 Disturbing bodycam video shows Arizona cops tasering a man 11 times, including on the testicles, as his horrified family scream for them to stop. The police are now being sued for “excessive force and torture.”

The nightmare tasering began when Glendale police officers approached a vehicle for a signal turn violation in July 2017. Johnny Wheatcroft was in the front passenger seat, while his wife Anya Chapman and their 11 and six-year-old sons sat in the back. A friend of the family was driving.

Officers Matt Schneider and Mark Lindsey asked Wheatcroft for his ID and he enquired why he had to show it, as he was not driving the vehicle. Police allege he went to stuff something in his backpack, and, after pressing the taser against his arm and telling him to “relax,” Schneider twisted Wheatcroft’s arm behind his back and pulled him from the car while still restrained by his seat belt.

The officer began tasering him when he was half out of the vehicle, before they pulled him to the ground and continued to tase him. Even after Wheatcroft was dragged on the ground towards the back of the car, his feet remained entangled in the seat belt. His older son leaned into the front seat to open the belt to free his father, prompting Schneider to shout at him, causing the boy to burst into tears.

Glendale police said in a statement that Wheatcroft “exhibited verbal non-compliance by refusing to identify himself and failed to obey the officer’s instructions.” Chapman reportedly swung a bag of bottles at Lindsey’s head during the incident, although this can’t be seen clearly in the video.


Horrifyingly, Schneider is next seen pulling Wheatcroft’s shorts down and placing the taser on the handcuffed man’s testicles. The lawsuit filed by the couple reports Schneider tased his testicles and perineum. He then placed the taser on his penis and said, “You want it again? Shut your mouth. I’m done f*cking around with you.”

Another officer held a handgun to his head and Wheatcroft was kicked in the groin.

According to the suit and the police’s own admission, the officers used a “drive stun” method, in which the taser is pressed against a person before being fired. Glendale police also released a 30 second CCTV video of the incident taken from a distance.

The pair were arrested and charged with aggravated assault and physically resisting arrest. They were both in jail for months as they couldn’t afford bail before Chapman pled guilty to a lesser charge so she could be released to look after her children.

Wheatcroft’s charges were dismissed by the Maricopa County Attorney’s Office after prosecutors saw the bodycam video, which his lawyers released to media outlets.

Schneider was suspended for three days after the incident, Glendale police said.