A man has been sentenced after slashing his throat in court over fears he was facing prison for accusations of sexual assault against a shopkeeper.

Lukasz Robert Pawlowski, 33, collapsed in a pool of blood after cutting his throat with a 3in blade which he managed to get through security at Haverfordwest Magistrates Court on January 11.

He was airlifted to Morriston hospital in Swansea and has been on remand since being discharged the next day.

Swansea Crown Court heard Pawlowski had hidden the knife under the bin.

Once in the courtroom, the defendant asked to go to the toilet, and when he returned he was holding the blade and started “concerted efforts” to cut his throat and began bleeding “profusely,” according to Prosecutor Robin Rouch.

A witness said: “He came into the dock, then asked to go to the toilet.

“He went out, came back, muttered something then started slashing at his throat,” the Daily Mail reported.

“The court room was then cleared out, and first aid was given by paramedics in the dock.

“I’m not sure if he lost consciousness but he did lose a lot of blood.”

Pawlowksi was reportedly awaiting sentence for sexual assault after he pleaded guilty to grabbing a shopkeeper and kissing her on the lips on October 30.

The prosecutor said the accused initially pointed at his cheek as if asking for a kiss before leaning over the counter and kissing the woman on the cheek. 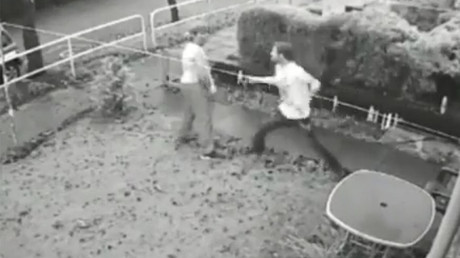 He later grabbed her from behind while she was carrying cans of lager, according to the Daily Mail.

He was arrested after being spotted on CCTV footage.

Swansea Crown Court heard Pawlowski had served the equivalent of a four-month sentence while awaiting the hearing.

In a statement, the victim, unnamable for legal reasons, said she had been left feeling “dirty” and “vulnerable,” and that she is now contemplating leaving her job following the incident.

Pawlowski was sentenced to a three-year community order after being charged with the double offense of sexual assault and possessing a bladed article.

Judge Paul Thomas said: “What you did when you mistakenly thought you were going to prison in fact has landed you in prison, where you otherwise would not have been.”