The man accused of murdering British MP Jo Cox was a dedicated supporter of the extreme-right National Alliance (NA) and had bought guides on how to build guns and explosives from the US-based neo-Nazi group, it has been reported.

Thomas Mair, 52, is accused of murdering Cox, 41, who was left bleeding on the pavement outside her constituency surgery in West Yorkshire on Thursday, after she was stabbed and shot repeatedly.

Witnesses say the suspect shouted “Britain first” during the attack, raising the prospect that the attack was linked to the European Union referendum.

Detectives are investigating whether the alleged shout was a reference to the far-right group of the same name. That group has denied any involvement and that Mair was a member.

According to receipts obtained by the Southern Poverty Law Center, an anti-hate campaign group based in the US, Mair had been a supporter of the NA for decades.

The receipts, which date back to the 1990s, show Mair spent £436 ($620) on literature from the NA, such as ‘Chemistry of Powder & Explosives’ and ‘Improvised Munitions Handbook’. 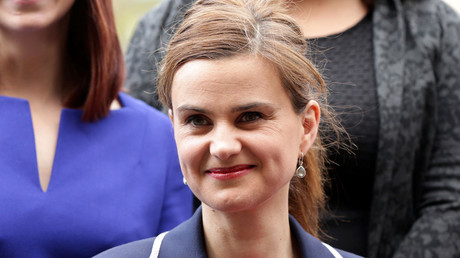 In the handbook, there are detailed instructions for constructing a homemade “Pipe Pistol For .38 Caliber Ammunition” from components that can be purchased from nearly any hardware store.

Receipts also show Mair bought the handbook ‘Ich Kampfe,’ an illustrated handbook issued to members of the Nazi Party in 1942.

The NA, which advocates for the creation of an all-white homeland and the eradication of Jewish people, may be best-known for his work of its now deceased founder, William Pierce, who wrote racist novels.

One, ‘The Turner Diaries’, tells the post-apocalyptic fictional story of a white man fighting in a race war. It provided inspiration for Oklahoma City bomber Timothy McVeigh.

According to the Daily Telegraph, a 2006 blog post attributed to the group described Mair as “one of the earliest subscribers and supporters of S A Patriot.”

Mair’s brothers say they did not know of him having any strong political views and did not know how he had got hold of a gun. They say Mair suffered from mental health issues.

Police say they are investigating claims the suspect had dangerous political affiliations.