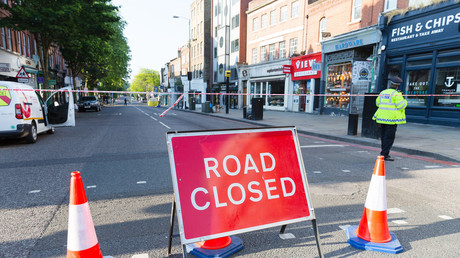 A middle-aged man has been stabbed to death in London’s second wealthiest borough, Kensington and Chelsea, bringing the capital’s murder rate so far this year to 67.

The man, believed to be a delivery driver, was found with multiple stab wounds at 10:20pm on Cathcart Road, Chelsea, on Wednesday night. He was reportedly attacked after failing to hand money over to a group of youth.

The victim, understood to be in his 40s, was pronounced dead at the scene despite ambulance paramedics’ efforts. The area is home to a string of affluent people, including Notting Hill star Hugh Grant.

Mika Simmons, who stars in British TV series Casualty, is a resident on the street. She tweeted: “A young black man has just been stabbed to death outside my flat on Cathcart Road, in Chelsea.

“I’ve been told he was working as a delivery driver & refused to give some other youths some money. @SadiqKhan @theresa_may when are you going to help these children? #KnifeCrime #London”

It comes as a rise in violent gun and knife crime rocks the city. Four men were stabbed to death last week alone. Across the UK, figures published in April showed a 22-percent annual rise in knife crime in England and Wales and murder increased by nine percent.

Amid what some have called a violent crime “epidemic,” former Home Secretary Amber Rudd launched a serious-violence strategy to clampdown on the rise in gun and knife crime, which has been steadily increasing since 2014.

The strategy, however, failed to mention that 20,000 personnel had been cut from police forces in the past eight years under the Tory government.