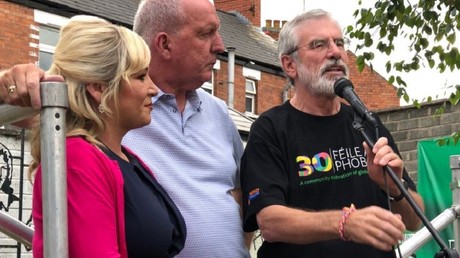 A 35-year-old man arrested in connection with what was branded a “reprehensible” attack on the home of former Sinn Féin leader Gerry Adams has been released on bail, police have confirmed.

The man was arrested on Tuesday night on suspicion of a number of offences, including criminal damage, linked to incidents at the homes of Adams and fellow party member Bobby Storey. Explosive devices were hurled at the properties on Friday night. No injuries were reported.

Footage from Friday night’s attack on the home of Gerry Adams. A rally will be held at Andersonstown Barracks on Monday 16 July at 7pm in solidarity with Gerry Adams & Bobby Storey #NotInOurNamepic.twitter.com/UVzjSAjgqh

The man was released on bail on Wednesday morning pending further police inquiries, the PSNI confirmed to RT.com.

Sinn Féin condemned the attack as “reprehensible and cowardly” and said it was reviewing its security system following the incident. A mass rally was held in Belfast on Monday in support of the two men.

Police are yet to say who is responsible for the attack, though Sinn Fein accused republican dissidents, who were branded “enemies of the people” by party president Mary Lou McDonald at the rally.