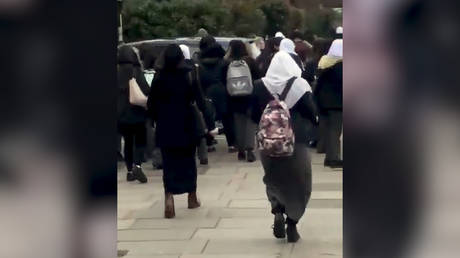 A man in his 60s has been arrested on suspicion of racially aggravated abuse after video emerged online of a horrific, racist tirade calling for young Muslim schoolgirls to be sterilized, citing inspiration from the Nazis.

The unnamed man was taken into custody by Tower Hamlets police in London on Monday after footage of a vile verbal assault was published online. In the video, a man can be seen describing schoolgirls, dressed in headscarves, “c**ts” and calling for people to “burn their ovaries out” so they can’t “breed like f***ing rats.”

The footage was reportedly shot outside the Central Foundation Girls School, in Bow, east London, a state comprehensive for 11 to 18-year-olds, on Friday afternoon. The man can be seen nonchalantly filming schoolgirls after he steps off the bus.

He’s filming school kids. He got off a bus to film kids….he really needs finding.

OH boy I thought this guy was going to document some racism. BUT IT WAS HIM! He was the racism!

I’m honestly lost for words at such vitriol.

Also on rt.com
BoJo was ‘respectful’ when he compared Muslim women to ‘letterboxes’ – panel clears MP of misconduct


The man decries “All these f**king black c**ts here,” while lamenting the current state of his apparent birthplace by declaring, “We are f*cked! This was England.”

Tower Hamlets police immediately launched an investigation after the footage appeared online and many appalled citizens called for the man to be apprehended.

On Monday, a silent protest was held outside the school to show solidarity with the students who had been the target of the racist and Islamophobic tirade.

Instances of reported hate crimes have risen by 17 percent in just one year with 52 percent directed at Muslims, according to a Home Office report on hate crimes in England and Wales for 2017/18.