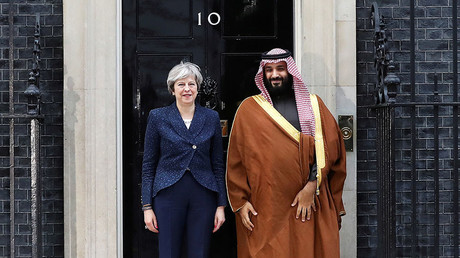 Mohammed bin Salman had a busy – and very public – evening, thanks to an embarrassing leak by a staffer. MBS’ itinerary was put on display for all to see, including a scrum of photographers waiting outside 10 Downing Street.

Saudi Arabia’s Crown Prince touched down in the United Kingdom on Wednesday for his first official visit. Media had already been told that the 32-year-old prince would meet the Queen, other royals and Prime Minister Theresa May – but thanks to a piece of paper flipped the wrong way, the world knows a lot more about what the crown prince is getting up to.

Security was of the utmost concern, with scores of police at the ready in Westminster and helicopters circling overhead. Security was tightened as hundreds of protesters picketed the PM’s official residence, denouncing the prince for his alleged war crimes in Yemen.

Golden rule when coming to Downing St don’t show the media the Crown Prince itinerary so to save embarrassing him I’ve adjusted the focus! He’s going to War rooms with Boris after tea with Theresa and then onto dinner with Princes Charles with photographs in Morning room. pic.twitter.com/sll9vq7XmX

One photographer shared the gaffe on social media. Before the photo was tweeted, however, it was blurred to protect the prince’s privacy.

“Golden rule when coming to Downing St don’t show the media the Crown (Prince’s) itinerary… He’s going to War rooms with Boris after tea with Theresa and then onto dinner with (Prince) Charles with photographs in Morning room,” the post read.

READ MORE: Who is the Saudi prince & why is this UK trip so important?

According to the Saudi Ministry of Foreign Affairs, MBS was received by British Foreign Secretary Boris Johnson upon his arrival in London. Throughout his three-day visit the crown prince will have a series of talks with UK officials, on topics such as strengthening cooperation in the combating extremism and terrorism, opening up opportunities for British business in Saudi Arabia, increasing the volume of trade and military exchanges, and listing Arab oil giant Aramco on the London Stock Exchange.

Floating Aramco would make for a significant post-Brexit boon for the British government. London is vying with New York and Hong Kong to be the venue of the initial public offering of the previously state-controlled oil giant that could be valued at up to $2 trillion.

A mere 5 percent of Aramco shares will be put up for sale – but could fetch up to $100 billion. Such a sale would obliterate Chinese e-commerce firm Alibaba’s record-breaking $26bn share sale in 2014.