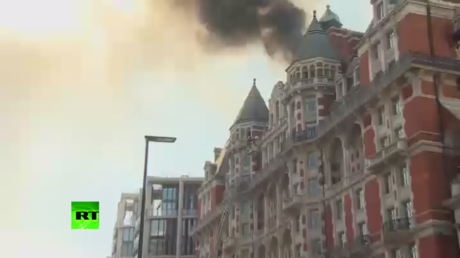 Over 100 firefighters are attending a major fire at London’s Mandarin Oriental Hotel near Hyde Park in the wealthy borough of Knightsbridge. It comes just weeks after the luxury hotel completed an extensive renovation.

Twenty fire engines and 120 firefighters are currently at the scene trying to extinguish the blaze, London’s Fire Brigade has reported.

Police said the hotel was evacuated and it was not yet known whether there had been any injuries.

Transport for London said roads have been closed as emergency services deal with the incident.

The luxury five star hotel has recently undergone a £185 million refit, including new bedrooms, public areas, restaurants and a spa.

Witnesses in the area have said there is “ash falling all over the roads.”

Soon after the blaze broke out, London Fire Brigade spokesman said: “Fifteen fire engines and 97 firefighters and officers have been called to a visible fire in William Street in Knightsbridge.

“The Brigade’s 999 control officers have taken more than 35 calls to the fire, which is producing a lot of smoke.

“The Brigade was called at 1555. Fire crews from Chelsea, Kensington, Hammersmith, Battersea and other surrounding fire stations are at the scene.

“The cause of the fire is not known at this stage.“

A spokesperson for the hotel said: “We are aware that there is a fire at Mandarin Oriental Hyde Park, London, and that the fire brigade is at the hotel.”

The hotel is often frequented by the Royal family despite Buckingham Palace being just minutes away. In 2011 the Queen hosted an event there for foreign and British royalty on the night before her grandson, Prince William, got married.